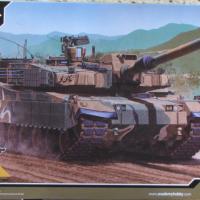 I have heard for the last several years that we live in a golden age of modeling due to the huge array of subjects now hitting the shelves of hobby shops. Academy continues this trend with the release of the Main Battle Tank of the South Korean Army. An indigenous design that is an evolution of the K1. Both vehicles bear a passing resemblance to the American M1 Abrams, though they are smaller. The K2 entered production in 2013 and was fielded in 2014. As you can see by the box art, it has reactive armor, a 120 mm gun, and a host of other defensive features to defeat anti-tank missiles. It has a crew of three. The loader was eliminated with an auto-loading system. It is a welcome addition to the plethora of modern vehicles that have entered the market in the last several years.

The plastic is in the familiar Academy tan. There are four single sprues, one that is double (mostly suspension parts) and 11 sprues for tracks! The upper hull, upper and lower turrets are all molded as single pieces. You can model two vehicles. There is a separate fold out with the color callouts, one small sheet of photoetch, decals, and a small sheet of what are called Polaroid stickers that are used to replicate the unique color of modern vision blocks. The parts are well molded and, as to be expected on a brand new kit, the parts are free from flash and they look great!!

In most tanks, you usually start with the suspension and move up the hull. With the K2, you start with the turret and work your way down. An interesting assembly sequence. You are given the opportunity to place additional ERA blocks on the turret. I chose the version that did not have those additions. Everything went to together very well and there were no problems. Rather than painting the vision blocks and thermal viewfinder, the kit includes a small sheet of transparencies that are appropriately colored. They have a very slight adhesive backing. So I wouldn’t have to mask the various vision blocks, I waited until the painting was complete to attach the stickers. To add to the bonding strength, I painted on a gloss coat for each sticker. They have a more realistic effect than attempting to paint ports with transparent red. The barrel of the gun is slide molded, so it comes together in one piece. Perfect. Details on the commanders .50 caliber machine gun were rather soft but adequate in this scale. The only change I made was to replace the nylon string with some solder I had lying around. While it is not braided, I am happy with the result.

The hull is not a bathtub style; you have to assemble the bottom, and sides and the back. It includes two bulkheads which gives the hull integrity and the sides attach with no problems. Once the hull is assembled, the suspension arms are attached to the hull. There are two different sets for the left and right, so pay close attention to the instructions so you don’t mix up the left and right. When the suspension arms are attached to the hull, they go on firmly, with little in the way of free play. The suspension wheels use a poly cap, allowing the wheels to slide on and off for painting. Once the suspension is completed, there is a really small parts count for the hull. As with the turret, you have to make a choice of attaching ERA bricks or keeping them off. I chose to keep them off. As with most armor kits, you don’t join the upper hull with the lower hull until the tracks are on.

Once the suspension is completed and before you marry the bottom hull with the top, the tracks have to be assembled. At eleven sprues, the tracks are by far the most numerous and, on the surface, intimidating. That being said, once you understand the assembly sequence, they go together like a dream! For each link, you start by gluing on two trackpads to the link. Pay close attention to the instructions, they are assembled with the smooth side up. Once the pads are secure, the links are connected with a track tooth. Keep in mind that there are two types of teeth, pay close attention to the instructions so you use the correct one. Once the two pads are attached, there are four pins for each link. Those are joined together by small connectors. Again, make sure the correct side is facing up. They go on fairly easily. So, bottom line, once you closely follow the directions, you get workable tracks! I am happy to see that, at least for this kit, Academy is moving toward these kinds of tracks. While tedious to put together, they are awesome!

The color call outs include a number of brands of hobby paint – Humbrol, Revell, and Vallejo, but they do not have Tamiya call outs. Since I paint primary using Tamiya, I did my best to find the equivalent. After doing some research online, I found the Tamiya four colors for a custom mix. For the green it was a 50/50 mix of Black Green (XF 27) and NATO green (XF 67). The brown shade is 75% Flat Earth (XF 52) and 25% NATO Brown (XF 68). The Black is NATO Black (XF 69) and the then the brighter brown is Buff (XF 57). For the tracks, I painted the pads in NATO Black and the pins in Tamiya Dark Iron (XF 84). Comparing the color call outs to the final model, I am very happy with the results. Prior to putting on the decals, I put on a gloss coat of Future. I usually let that set for two days before putting on the decals. The decal sheet has more markings than what the instructions call for, so this step went quickly and efficiently. There were no problems.

Since Academy is based in South Korea, it makes sense that they should create kits based on Korean AFVs. While some may be turned off by the esoteric subject matter, I would much rather see vehicles like this rather than another Sherman, Panther, or Tiger. While the details may be a bit soft and some may be put off by the tedious and challenging tracks, overall this is a well-engineered kit that goes together like a charm. My thanks to the IPMS USA, Academy and Model Rectifier Corporation for giving me the opportunity to review this kit.