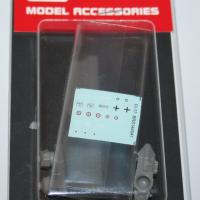 The Renault FT (the 17 was added after World War I) was the first modern tank to reach production. The big advance over previous armored vehicles was the armament in a fully rotating turret, which allowed the tank to shoot without maneuvering. There were over 3,000 FTs built in France during the war, and there were 950 M1917 light tanks built in the United States. None of the US built tanks were completed in time to see action in the war, but France lent 144 FTs to the US Army in mid-1918.

There were many users of the FT, including Afghanistan, where 4 were discovered by US Forces in 2003, Belgium, Brazil, China, Croatia, Czechoslovakia, and 19 others, including Nazi Germany.

This is a tiny vehicle in 1/144, smaller than the US Staff car I built recently. The kit is 100% resin, with no PE or plastic. The hull is one piece, there are 2 turrets, the cast and welded, the tracks, two-gun choices, 37mm cannon or machine gun, the exhaust and the rear tail with 2 supports.

There are decals for two German, two French and one US tank.

Most of the time of the assembly consisted of cutting or sawing the parts off the pour blocks. The turret and hull required some careful sawing, and the tracks required cutting with a #11 blade. I cut the rear tail and hull first, and assembled them. This turned out to be an error, as during painting, the tail came off. I also cut out the tracks.

I chose the US Army version. The color scheme is overall sand with green splotches. I airbrushed the sand, and brush painted the green. I painted the track assemblies and the turret at this time.

The instructions show only the left side of the tank. I found an online build article for a larger model of the FT and used their paint job as my pattern.

The tracks were painted using Model Master Burnt Metal, which has a nice darkish metallic look.

I now put the turret on, using white glue.

There were only 3 decals for the US tank, all on the turret. The decals behaved nicely, came off the backing sheet fairly fast, and stayed where I put them, but allowed some adjustment.

Once I had the decals on, I put the tracks on, added the gun to the turret, and installed the exhaust. I then reinstalled the rear tail.

Recommended. The model is nicely done, and worth the extra effort of working with the resin parts. This month’s IPMS Chapter meeting had the theme of “armor”. And I had the smallest tank on the table. Nevertheless, it got some attention, as WW I armor is pretty rare. I’m happy to add this to my collection of 1/144 vehicles.

Many thanks to Brengun for this really interesting and well-done kit. And thanks to IPMS USA for allowing me to review it.