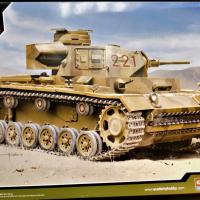 The Panzer III was a medium tank developed in the 1930s by Germany and used extensively in World War II. It was intended to fight other armored fighting vehicles. However, as the Germans faced the T-34, more powerful anti-tank guns were needed. Therefore, the Panzer III effectively swapped roles with the Panzer IV and was used primarily for infantry support.

The kit can be built with standard Panzer III Aust J version with or without the spaced armor. The large, sturdy box holds six bags containing two sprues each, a small photo etched sheet and decals for five different versions of this tank. The instruction booklet is 20 pages long with 23 assembly steps and five color painting/decaling placement pages. You must decide before building which version you want, since you have to drill holes in eight pieces to start with. There is no hole size indicated, so I used a 1mm drill bit, but had to enlarge a few later. The instructions show you in red where to apply the glue which is very handy. They also have some photos of completed kits to show exactly where the photo etched parts go. This is a great idea. I decided to build version 2 with the spaced armor, but I added the larger gun barrel from version 5 just because I think it look cooler.

The lower hull is the first construction steps. This hull is made from flat panels, not a bathtub type hull. These parts fit together great and have internal supports to help line everything up correctly. The suspension arms fit perfectly and lock into place. This helps the roadwheels to line up great and all sit flat on the tracks. The roadwheels do not have that pesky seam down the middle like most other kits, so this makes clean up a lot easier. The wheels fit snuggly onto the suspension arms and can be put on and removed easily. The tracks consist of a long bottom run, short runs for the sides and individual links for the top and over the sprocket and idler wheel. The instructions call for 54-55 link, but I used 56 to get a nice sag on the top. The instructions show a tab on the fenders that the front fenders connect to, but this tab is not there. The front fenders still fit fine and glue to the hull for a secure fit.

The upper hull is in about six pieces and not one single pieces like most kits. You build the upper hull onto the lower hull piece by piece. These pieces fit great together, and I like this way of construction. The headlights are a solid piece of plastic and not a clear piece. The tools have their clamps molded onto them, but they look great and the correct types of clamps. The photo etch screens on the rear air intakes are totally hidden after putting on the rear plate. I left them off and put in my spare parts bin. The top mounted screens are very visible and fit and look great. The tow cable is molded in plastic with its mounting clamps but looks fine. I left it off the engine deck until after painting.

The only fit problem I had was with the lower turret and upper turret fit. The lower has armor plates that come up in the front and they left a gap where they meet the upper armor. I applied lots of glue and squeezed them together to fill this gap. The side armor plates on the turret are separate parts and need mounting markers removed. This along with some spare parts signals that other versions of this tank will be released by Academy later. The hatches all have interior details, so they can be mounted open. There are no interior turret details except a very basic gun breach. The commander’s copula can have its armored vision ports open or closed. The turret clips onto the hull and will not come back off. I found this out by accident when I test fitted a half-assembled turret and could not removed it.

The decals are thin and have very like clear film around the edges. I used a couple applications of setting solution and they snugged down great. There are quite a few decals to choose from, so there will be a lot of leftovers. I applied mine over a coat of gloss. I sealed with a satin coat and had no problems with the weathering affecting them.

I would like to thank MRC and IPMS for the opportunity to build and review this enjoyably fun kit.