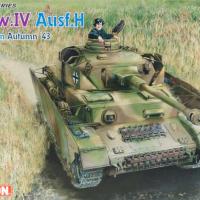 OK, what does an airplane guy know about tanks? Well, let’s see – they make great targets and make a mess of a training area. Truth be told, I did win a trophy at the Nats for a tank. Surprised? So was I. As an airplane guy I always wanted to build some tanks, in particular German tanks, but for the longest time it was the zimmerit that prevented me from buying them. Then it was all the aftermarket stuff to make the kit “correct.” Thankfully, Dragon has started retooling their kits to make them more accurate, and they contain aftermarket stuff right in the box. On top of that, they priced their new kits, with all the aftermarket, at the same price as their previous releases. Then they added zimmerit on the appropriate kits. I couldn’t think of any more reasons to not buy these kits. Of the last 20 kits I’ve bought, no less than 12 have been Dragon tanks. I feel so dirty.

I’m not going to cover the history of the tank. There are better people out there than me to cover that. Let’s talk about what’s in the box. Inside a large box with nice box art, the first thing you will notice is the amount of plastic, PE, and just lots of stuff in the box. I was very impressed with the amount of parts included, 984 in total. There are over 690 plastic parts, 216 Magic Track links, and 15 clear styrene parts. To supplement that, there are 51 etched brass and 10 steel or nickel parts. There is also a length of wrapped tow cable included. Decals consist of a small sheet with markings for one tank.

The first thing I did was grab the instructions. Printed in typical Dragon style, there are 20 distinct steps. One thing that I did notice is that there are quite a few parts that are not used, which makes a good addition to the spare parts box, but it also ensures that the kit has the correct parts for this version. The drawings all seem to be easy enough to understand and overall should present no problem, even for this aircraft modeler. There are places where the modeler will have to drill out holes, so just be careful.

The slide mold technology is very impressive, with an awesome amount of detail even on the smallest parts. Some of the new parts that are included are the new air filters.

The build up of the hull is quite involved, but because of the slide mold technology the fit of everything shouldn be near perfect. The gun breach is a beautiful rendering. The entire interior is not represented but the parts that can be seen through the poseable hatches are included.

The PE parts are beautifully rendered and easily equal to the stuff coming out of the Czech Republic. The PE is one of the things that turned me on about this model. Maybe it speaks to me on a primal level from my childhood, but the appliqué sides add to the look of the tank. The best part about the PE besides the scale thickness is the ability to “battle damage” it.

The Magic Track links have come under some criticism for their difficulty in assembly. I leave that up to the modeler, but you get two directional tracks. If there was a place for aftermarket, I think this is where you could get away with Fruil track links.

If there was a downside to the whole thing it would be the paint and decal selection. You only get one set of markings for an unknown unit. The paint scheme is a three color scheme that is really nice, but I would have liked more options. The decals themselves are printed by Cartograf so you know they are the best in the world. They only include four black and white crosses.

If you’re an aircraft modeler and were wondering what all the fuss is about with the new Dragon tank kits, this is the model to showcase all that is great with these new kits. Impressive details and excellent fit are highlights of this type of molding technology, so you can’t get much better. Cartograf decals and all the extra parts make this offering a bargain, but other than the one marking option I couldn’t find anything wrong with this release. If you were waiting for your first tank model this is a good first kit of an interesting tank. German armor modelers will definitely enjoy this kit. I’m impressed with the quality and quantity of parts, as well as the aftermarket items that are included all for a bargain price. Great job, Dragon.

Thanks to Dragon, USA and IPMS/USA for the review copy.