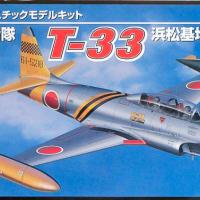 Platz Hobby’s latest boxing of their very nice 1/72 scale Lockheed T-bird kit provides an impressive array of decals to finishing the model as one of six different Japanese Air Self Defense Force T-33s based at Hamamatsu airbase. The license-built T-33s, along with AT-6 Texans and T-34 Mentors, formed the backbone of the JASDF’s training command at this historic air training base. Sixty-eight T-birds were in service at Hamamatsu in the mid-1950s, and they were among some of the most colorful T-birds to be found anywhere at the time.

One of the original releases of this kit was reviewed on this site two years ago, and the reviewer’s comments correctly describe it as superior to the aging 1/72 scale Heller and Hasegawa kits that most of us are familiar with. In recent years Sword also released a T-33 kit with excellent detail that includes some resin cockpit and wheel bay parts. However, the Platz kit is an easier build and provides adequate (and reasonably accurate) detail.

In their earlier boxing of the T-33, Platz previously included a pre-painted photo-etch fret, but no PE is included in this kit (although both Platz and Eduard offer aftermarket PE sets for this kit). What this boxing offers builders is a wealth of decal options that may offset the lack of photo-etch.

The kit includes 58 gray, injection-molded parts and one clear part. The molding is excellent. For the most part there is very little flash to worry about, and the parts are molded crisply with fine recessed panel lines and nicely rendered details. There are a couple of minor sink marks along the fuselage that need attention, but they are slight and will disappear under a coat or two of Mr. Surfacer 500. In this reviewer’s opinion, what sets this kit apart from many others is the decal sheet. There are an amazing number of decals on the single decal sheet that provide markings for six Hamamatsu T-33s. The instrument panel and sidewall console details are included as decals, along with National insignias, aircraft numbers, leading edge color bands, wing walks, warning stripes, and the other major aircraft markings. But, all of the decals are outnumbered by a staggering number of airframe stencils. I counted over 200 separate decals on the sheet before I gave up. The decals are produced by Cartograf, and they are very well printed and perfectly registered.

Kit instructions are printed in black and white on a six-page fold-out sheet with easy to follow sequential construction steps. Colors are specified by both FS numbers and Mr. Color paint numbers. The instructions also provide color call outs and comprehensive decal placement diagrams, which including the staggering number of stencils. There is very little that is not clearly spelled out.

Markings are provided for:

Assembly is pretty straight forward, but the fuselage is split in the middle where the tail is separated from the forward section, making it necessary to assemble four parts to complete the fuselage. On the real aircraft, that point of separation is designed to facilitate engine removal and service. The interior areas of these parts are fully detail, suggesting that modelers could build the model with the fuselage sections separated to display the engine. However, no engine is included in the kit. So, unless the modeler can locate an aftermarket engine, closing up the fuselage will be a logical step in the build.

The wings are molded in typical fashion with separate port and starboard top sections and a single combined lower section. The main wheel bay is molded into the lower wing section and provides an adequate amount of detail. Control surfaces are molded with the wings in the neutral position and the wing tips are actually part of the wing tip tanks. The wing tip tanks exhibit a high level of detail and add much to the look of the finished model.

Undercarriage parts are somewhat simplified but nicely detailed. Airbrakes may be positioned in open or closed positions. The fuselage intakes are cleverly designed, and they fit nicely with interior blanking pieces and splitter plates that key into place perfectly. The canopy is molded in one piece. It is crystal clear and fits perfectly. Cockpit details, as noted above, are reproduced in decal form. However, they look convincing under the closed canopy. One cockpit detail, the rollover bar, appears out of scale. I decided to thin it down by carving and sanding away about half of the part’s thickness.

Overall, the assembly is straight forward with the exception of building the fuselage as two separate units and then cementing the sections together. I should point out that Platz apparently took a page out of Hasegawa’s book when they came to the vertical fin. Platz molded it on one of the rear fuselage halves, and it keys into a portion of the fin molded as part of the other half…exactly like Hasegawa designed it decades ago. However, the fit is excellent and everything aligns well when the sections are combined. The parts on the sprues match the ones indicated in the instructions and most go together with no drama. The recessed panel lines are consistent and align nicely where they cross from one part to another.

I usually manage to find a few spots to apply some putty when I build any kit, and I found it necessary in only one area on this one: on the underside of the fuselage where the intakes blend into the panels behind them. Without filling and smoothing out that transition (and scribing a couple of panel lines), the modeler will be left with an unacceptable step and the flight crew will be left fighting a lot of air turbulence.

There are three other things I found worth mentioning about the build: 1) The plastic is soft enough that it should be treated with a little respect since most of it will receive a natural metal finish. I found it was not difficult to leave a mark here or there when separating the parts from the sprue gates with a pair of nippers. Therefore, it is advisable to leave a bit of the gate stubs when removing parts from the sprue and sand them off instead of snipping the parts right at the point where the stub ends and the part begins. 2) When assembling the nose wheel, the landing gear brace (Part C8) fits so tightly against the wheel bay walls that I had to notch the wheel well doors (Parts C21 and C24) to fit them in place. 3) I found the main landing gear actuating rods were a bit too long and caused the landing gear to flare outward, so I trimmed the pins enough to align the gear correctly (vertically).

Other than those small issues, it proved to be a pleasant build; one that justifies continuing to tell non-builders that this hobby really is “fun.” Actually, the real work comes when it is time to apply the decals, not because they are difficult to apply, it’s just that there are so many of them to apply. The photos below show how the model looks when completed. It’s a very respectable representation of a T-33, and a colorful one at that.

This kit is recommended to builders at all levels. It is an enjoyable build and will produce a well-detailed and colorful 1/72 scale replica of a T-33. My thanks to Dragon Models and Platz Hobby for providing the review sample and to IPMS/USA for the opportunity to build and review this kit.