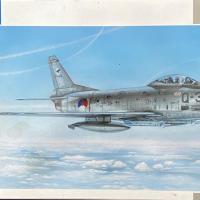 The F-86 D was built as a stop gap interceptor while the U.S. developed more sophisticated and mission specific aircraft for that purpose. At the same time, the European NATO operators realized they needed the same type of aircraft and the F-86K was the result. The F-86K differed from its U.S. built examples by installing cannons in lieu of the rockets on the US version. Some plugs were added into the fuselage to maintain the center of gravity. Italy’s Fiat company produced license-built versions of the F-86K. Also of note, was the capability of some of these aircraft to carry sidewinder missiles.

This is an upscaled re-box of Special Hobbies 1/72 F-86K (Stock #72146) released a few years ago. Most of the kit is the same including the box art and decal options. The differences include resin parts for the augmenter, wheel wells and HUD. The plastic parts are generally well done having fine recessed panel lines and decent fit. The only issue is the surface has a slightly rough texture and given that all the finishing options are natural metal finish, this has to be addressed if you want a smooth surface for paint. Unlike the smaller kit, the instrument panel is a plastic part in lieu of photoetch with film back. A decal is included for the instruments and it produces a good result. This kit includes a molded canopy unlike it smaller cousins vacuform part. The decal sheet provides three options for Norwegian, Dutch and Italian examples. Sidewinders are included but the forward fins are not included leaving the builder to scratch build them or raid the spare parts box. A nice feature are separate slats that can be posed open.

The build is straight forward. The cockpit parts are nicely done and fit well. You’ll have seams to fix on the intake parts. The nose gear well is in separate parts and the instructions would have you mount the landing gear leg but I left it off as it is possible to install later. There is a landing light just ahead of the nose gear that need to be opened up to accept a clear lens. It has a nice photo etch trim ring so don’t worry too much about making a perfect hole. The exhaust is all resin parts that you can leave off till the painting is done. Don’t forget ballast or this one will sit on its tail. Beware, the resin gear well parts that install in the wings are to tall and without major sanding, you can’t close the wing halves. If you elect to open the slats, make sure you follow the instruction as the actuators are different lengths. The plastic used is very soft and reacted to glue by leaving surface flaws is some places so use it sparingly.

All of the finishing options are natural metal finish. After working over all the joints and scribing the lines back in, the primed with Alclad gloss black basecoat. To my dismay, it never fully cured and I was left with a tacky mess. Back to square one. All of that was removed by wet sanding and re-primed with decanted Tamiya black lacquer. I used Alclad paints in various shades and Valejo for antiglare panels.

The decals are a high point in this kit. They come off the paper almost immediately and conform very well. My only gripe would be the placement drawing that is so small it’s impossible to tell the orientation of some of the extensive stencils on this aircraft. Most of the finishing details go on without a hitch but Special Hobby has created a new patience test. The F-86 in all forms has a lot of vortex generators on the tail section that keep the airflow from going places it shouldn’t and causing tail flutter and other dangerous flight characteristics. For your modeling, huh, pleasure they are included as some of the smallest photoetch parts ever created! There are photoetch plates for the stabilators that have slots the vortex tabs fit into which makes that part a bit easier. The fuselage molds have small ticks that locate the tabs so make sure you don’t sand those off. If you have the eyes, patience and tweezers small enough to hold them the end result is pretty cool.

This isn’t a kit that falls together out of the box. Being a short run offering, it has few alignment pins and the surface texture has to be dealt with if you want decent natural metal finish. What I did like is Special Hobby put the detail where it counts. The cockpit, gear wells and exhaust are very well done. Some modeling skill and patience will reward you will a nice representation of the F-86K.

Thank you to Special Hobby for providing the sample and IPMS for allowing me the challenge of building this kit.