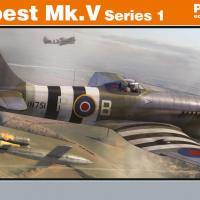 The Hawker Tempest Mk V was a follow-on fighter from the Typhoon. It proved to be a superb mid to low level fighter and ground attack aeroplane.

This is Eduard’s brand new mold of the Tempest and effectively puts their older (but still very acceptable) model, Cat 1169, out to pasture.

This is the ProfiPACK which includes color photo etch, masks for the canopy, wheels, lights and walkways, as well as a nice in register decal sheet and a high quality paper instruction book. The ProfiPACK provides the modeler with just about everything needed to build a very nice model out of the box. For this build review, I also used Eduard’s resin wheels, exhaust pipes, “Look” instrument panel, steel seat belts and gun bays.

For whatever reason, several parts had separated from the sprue trees and some were separated or broken. I have other Eduard kits where everything was intact, so this damage may have occurred in transit somewhere with the extra mailing of the review kit. Everything was repairable.

The instructions are easy to follow in a logical sequence. A very comprehensive history of the aircraft is provided, along with detailed descriptions of each aircraft and pilot that can be modeled.

Following the instruction manual, I started with the cockpit which is built up with metal tubing sides, rear bulkhead and front firewall. The side tubing parts, D17 and D4 are extremely fragile and best removed from the sprue using a razor saw. One of mine was broken in three pieces. Various side panels take photo etch (PE) levers and other items, while the very nice seat is completed with color PE seat belts. I intended to use the pre-painted resin Tempest Mk. V LööK 1/48 (# 644006) instrument panel, but I thought the kits PE instrument panel was actually better with finer details. However, not much can be seen in the end, so either panel would be just fine. I deviated from the instructions with parts E74 and E16 which are a control box and a shelf that attach to the right side of the cockpit. Eduard instructions suggest inserting these after the fuselage halves are joined. In such a small cockpit space I found it easier to insert the complete cockpit assembly in the right fuselage half, attach these two parts and then join the two fuselage sides together.

At this point I removed the right wing gun bay covers using a razor saw and Dymo Tape, and assembled the resin and PE gun bay.

With the cockpit and right wing gun bay finished, I moved onto other sub-assemblies such as the wheel wells. These built easily into the upper wing half and are quite detailed, however, they were just missing some of the pneumatic tubing and wires. The edge of the gun bay interfered with a corner of the wheel well so I sliced a wedge out of the well wall. Unfortunately, I took a bit too much off and had to repair that corner.

The radiator with its associated plumbing, intake cowls and exhaust ramp were easily assembled with the assistance of slots in the inner fuselage side to help alignment.

The wings were glued together, trapping the wheel wells and gun bay. Be careful of the inner gear door retraction struts. I broke both off when attaching the wing halves together. The upper wing includes part of the flap trailing edge underneath which left a seam running the length of the flap 3mm in from the trailing edge that needed to disappear. I’m sure the logic was to end up with a sharper wing trailing edge, but, most of the nice rivet detail was effectively lost dealing with the seam. These and other rivets and panel lines were reinstated afterwards. Another oddity is that the fuselage contains a portion of the flap so another “L” shaped seam has to be dealt with. I filled all the seams with super glue, and carefully sanded them so as not to destroy too much surrounding detail. None of this assembly and cleanup work was difficult, but I think it would have been better if the flaps were either: (1) Molded as one separate part; (2) Molded complete with the upper wing half; (3) Both upper and lower wing halves joined at the very rear edges; (4) Cut the flaps out and use Eduard’s Photo Etch landing flap set # 48977.

With everything mounted in the right side fuselage, the halves joined nicely and seam cleanup was minimal. This is a good thing as there are lovely raised and recessed rivets fairly close to the seams. The wing to fuselage fit was quite good. I added small shims to the tail planes as their fit was a little loose. I thinned the shims until I was happy with how everything fit and lined up. Liquid glue was then brushed over the seams. All control surfaces – ailerons, elevator and rudder were attached, and all fit well. There were a few shallow sink marks in the control surfaces, but, I left them alone as I didn’t want to damage the surface detail. They really don’t show that much after painting.

A section of the upper fuselage is then attached. It includes the windscreen mount, the side and rear canopy rails and the deck behind the cockpit. The engineering here is outstanding and came out looking very good. Don’t forget the frame including the gunsight and cockpit lights that mount under the instrument coming. It’s easier to attach this first (ask me how I know!!!)

After confirming all seams had been taken care of, scribing and riveting lost detail (mainly the flaps), I tackled the strengthening plates around the rear fuselage. These are supplied in PE. Some raised rivets were removed so the plates would lay flush. I ran tape around the fuselage to position the plates in the correct place, starting with those that lay over panel lines, followed by those in between.

I used Eduard TFace masks to cover the inside and outside of the canopy and windscreen, then sprayed the inside black. The windscreen inside masks were removed and it was glued in its slot. The fit was perfect. A separate interior frame that included the canopy rail wheels were glued inside the canopy. I have never seen canopy rail and wheels included before. Nice!!

At this point I attached the landing gear and associated retraction struts and gear doors. Everything fit nicely, although, I had to open locating holes for the retraction struts a little as they were too small. I think paint may have been the contributing factor there.

The cockpit and lights were masked off and the Tempest was taken down to the paint shop. I sprayed the white areas of the Invasion stripes first, and then determined the 18” stripe width to be just under 1cm in 1/48 scale (0.9 mm). As most invasion stripes were hurriedly painted on, instead of nice straight edges, I tore tape along the edge of a ruler to produce a rough “hand painted“ appearance. From the instruction sheet I determined where to start the stripes and marked where to lay the tape using my “hi-tech” measuring tool (see picture). Black was them sprayed and when dry, all the stripes were masked off to paint the camouflage colors.

With the painting done and gloss coats laid down, I started applying the decals. These are made by Cartograf and were superb. Most sucked into panel lines and rivet detail with little help from my decal solution. I found rolling a Q-tip (cotton wool bud) over the fuselage raised rivets helped push the roundel, registration and R/B decals down to conform around this detail. There were quite a few stencils and all are legible. Another gloss coat was applied after decaling, followed by a panel line wash to bring out all the fantastic detail. A flat coat finished the painting.

I attached the resin wheels, propeller/spinner, boarding step and all the small parts, applied some weathering and exhaust smoke stains, and called it done….almost!!!

While I was removing the paint masks on the sliding canopy, I managed to crack it in half. I emailed Eduard Customer Service to see if they could send me a replacement and that I was willing to pay for it. Petra replied to my email the very next day and said a replacement sprue was being sent. Now that is what I call customer service! When it arrives, I will be more careful painting it and replacing the broken canopy.

This new Hawker Tempest V is a terrific model! What is included in the box is really all you need to build a fine example of this late war fighter. With all the other Eduard goodies I used, it is even better! I don’t think this kit would be beyond the ability of a “somewhat” new modeler, but, I would recommend it to someone with experience using photo etch, delicate and fine parts and repairing lost details.

My sincere thanks to Eduard and the IPMS for the privilege of building and reviewing this great kit.