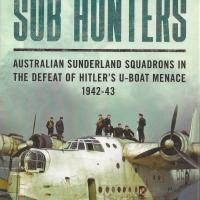 This book covers Australian Sunderland operations against the U-boats in Europe in 1942 to 1943. The book is divided into 10 chapters along with an introduction and three appendices, telling the stories of Nos. 10 and 461 Squadrons and their exemplary service in the RAF’s Coastal Command. Serving from UK territorial waters to the Bay of Biscay these Sunderland crews faced the many hazards of weather, long patrols over sea, German fighters, and flack.

These two squadrons were responsible for sinking 11 German U-boats and one Italian submarine. Of the 54 aircraft used by these squadrons, 23 were lost. 12 were shot down by enemy aircraft, 6 crashed on takeoff or landing, 1 disappeared after an SOS and another was lost at sea, after engine failure, 1 was shot down by a U-Boat, 1 exploded while in flight and another crash landed on an airfield.

The book contains a full action history of both squadrons and station areas. Combat stories are both harrowing and exhilarating. These men fought hard, played hard and did their utmost to serve their country and the Allied cause. I thoroughly enjoyed reading about their exploits and learned a lot of new information, as you will. The aerial battle against the U-boats is not often covered, Aussie squadrons even less, so that is why this volume is so welcomed.

This is a great book supplemented with poignant photographs. I can recommend this to anyone with an interest in WWII, WWII aviation, flying boats, Aussie WWII history and Coastal Command. The author has found a wealth of information and communicates it well. My thanks to Casemate for the review sample and to IPMS for the opportunity to review the book.