OV-10 Bronco: Designed for Counterinsurgency and the Vietnam War 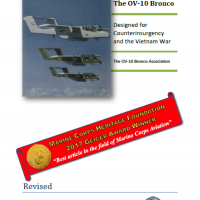 Thanks to Mr. Ashby Shoop for providing me a copy of this booklet during it’s development, and the Fort Worth Aviation museum for sending a finished E-copy to me to review after purchase.

If you are looking for a quick reference on the OV-10, the Folks at the Fort Worth aviation Museum have a new document which provides an excellent, concise history of the aircraft. Included are development and early history of what the requirement is that led to the Bronco, who worked on it, and the history of how the aircraft evolved. The majority of the book focuses on Marine air and navy use; Air Force operations are touched on but not in detail.

What really adds value to the book are descriptions of loadout and operations, which confirm configuration of particular offensive weaponry. The OV-10, although cleared for gravity operated "dumb" weapons, was mostly regulated to forward-firing smaller weapons such as 2.75" FFAR and Zuni rockets. According to the author this was due to competition between USAF and Naval Air operations and "fast jets verses slow movers", which is touched on in the booklet.

The development of the OV-10 is examined in detail. One of the test aircraft is at the museum, so that’s worth stopping for in itself if you are in the area. Variants of the basic OV-10 are a focus; the NOGS version, in particular, examines early turret-armed experiments.

Inserted throughout are multitude pictures in color and black and white of interest to the modeler. Of particular note is the profile drawing of the center-line 20mm Gun pod, which looks unlike any other pod currently marketed within conventional model external stores kits. A bit of scratch-building would be in order here...

One thing this book confirmed to me was the reason the resin Zuni Pods available on the market have disappeared relatively rapidly; both 1/48 and 1/32! Because all those Paragon OV-10 upgrades for the old Hawk kit are obviously being put to use to carry them... along with the new Kittyhawk kit.

Not much to say other than "more than worth the price "... I got more out of this book than some much more expensive titles. It captures operations in a great way, has interesting anecdotes, and has enough reference photos that I had not seen before to allow serious use of the AoA decals for the "Black Ponies". Well done to Mr. Shoop for taking the time to research and provide a great title!

Discussion of hydraulic system, survivability, and the cockpit, with a diagram of the instrument panels

Discussion of ordnance carried by the OV-10

The OV-10 in its NOGS deployment in 1971
Previous Next