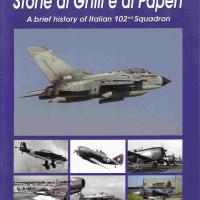 Pierpaolo Maglio is a great modeler whose work can be found on line but for the those that don’t know, he is also a published author and his latest book is what this review is about, a brief history of the Italian 102nd Squadron.

A look at the index shows the history starting in 1942:

As an overview, the history covers the start of the group and Nazi supply of Stukas to the modern day and the Tornado IDS and each step in between. It is well illustrated with period photos and you can see a switch to color as that came along. Markings and pilots are covered and the text is in both Italian and English. The pictures are especially good and have some great marking schemes included. The F-84’s had some very colorful schemes.

Delving into an individual chapter, the introduction of the Tornado IDS put stress on the group as it was last to convert and they needed to come up to speed very quickly. Operations during that time were covered and there are wonderful pictures of the group both on the ground and flying including pictures when it participated in 1992 Red Flag at Nellis AFB. Also present is the groups mascot painted on the plane- Donald Duck! For the modeler, there are great photos of some unique planes.

From an historical or modeling stand point, this is an excellent reference of an important group and covers the history from props to jets and in great detail. It is most highly recommended to history buffs and modelers alike.

My thanks to Aviation Collectibles for the great read and reference.