British Ground-Attack Aircraft of the 1970s and ‘80s 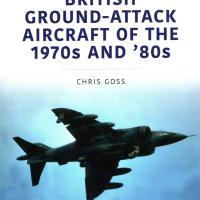 I was not familiar with this series of books, so I was not sure what to expect. But being a fan of British aircraft, I couldn’t pass up the chance to review it. This book by author Chris Goss is just under 100 pages and measures 9.5” tall and 6.75” wide. There is a short forward by Air Marshal Philip Sturley and a one page introduction by the author. All of the photographs are from the collection of the late David Howley. The book contains one chapter covering the Jaguar and another covering the Harrier. There is also a short appendix listing the different variants of the two aircraft and units that operated them. The pictures are a mixture of black and white photos and color photos and are presented two on a page for the majority of the book.

Most of the photos are of the aircraft on the ground, but there are some in-flight photos scattered here and there. There was obviously a lot of research done on the part of the author to track down the histories of each aircraft. The Jaguar is presented first, and there are over 80 pictures covering the GR.1, GR.3, T.2 and T.4. The photos are basically in chronological order from the year the photo was taken. There are a few closeups of unit badges scattered throughout. Most of the aircraft wear the usual green and grey camouflage, but there are a couple of more colorful examples of test aircraft. Each picture is accompanied by a caption which tells the history of the particular airframe shown, some of which came to tragic ends.

The Harrier is represented by 90+ photos covering the GR.1, GR.3, T.2 and T.4 along with the Sea Harrier FRS.1 and FA.2. In-flight shots are more plentiful in the Harrier section, several of which were taken at various air displays. The Harrier section also includes a few shots of unit badges in color as well as tail artwork on Sea Harriers. I very much enjoyed this book, particularly the section on the Jaguar as it is one of my favorite jets. I would recommend it to modelers for inspiration. I know it inspired me to go to my local hobby store and pick up one of the Kinetic 1/48 Harriers (I already have plenty of Jaguar kits). If you are looking for walk-around details and profiles, this book probably wouldn’t be a good choice. But if you are interested in quality historical photographs of the Jaguar and Harrier with informative captions, this book is an excellent choice.

Many thanks to Casemate Publishing for the opportunity to review this book.