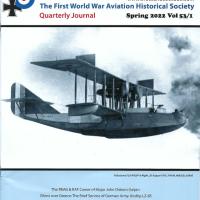 The Spring 2022 journal of Cross & Cockade International features a nice sharp black and white photograph of a Felixstowe F2A, N4297, flying boat in flight on August 20, 1918.  The rear inside cover has two more black and white photographs of Felixstowe F2As to coordinate with the first article in this issue.  The rear cover has three color profiles of Nieuport XH floatplanes by David Mechin.  These illustrations support the final installment of Ian Burns’ Floatplanes Over the Desert: The Adventures of l’Escadrille de Port Said, 1914-1916 articles that ran in 2021 over three issues.  The center section, The Gazetteer, consists of nine black and white photos, and fourteen black and white maps. Also included is a separate folded color 1/100,000 map consisting of eight pages when folded up.  This issue’s map focuses on Tournai and Paris-Chalons Flying Sites.

Gordon Leith is up first with a biography: The RNAS & RAF Career of Major John Osbord Galpin, DSC, DFC.  This tale focuses in on his activities with the Felixstowe F.2A with several first person accounts.  This 14-page article includes 28 black and white photos.  The two photographs on Page 53-013 show off a 1918 portrait of John Osbord Galpin wearing his DSC ribbon and a Felixstowe F.2A.

Peter Chapman chimes in next with an intriguing feature on the Ghost Over Greece: The Brief Service of German Army Airship LZ-85.  This twelve page feature includes 27 black and white photographs.  Typical of these is depicted on Page 53-018 where LZ-85 is shown above a hanger at Temesvar along with two photographs of the LZ-85 gondolas.  Again the highlight for me were the first person accounts.  Bombing raids on Salonika are described in detail, including the fourth, and last one where LZ-85 was brought down.  Amazingly, none of the crew were killed in the crash, but all were held in captivity as prisoners of war.   The LZ-85 wreckage remains were disassembled and taken to Saloika where it was re-assembled and put on display

The late Stewart K. Taylor is back with a nineteen-page tale article on the Canadian nick-named Twinkle Toes. The second installment of this biography of Capt. Jack Victor Sorsoleil is brought to life through interviews, letters and diaries of airmen who served with Sorsoleil.   Twenty-four period photographs accompany this seventeen page article. The top photograph on Page 53-031 shows off a nice tail shot of RAF SE5a B8402.  This airframe survived nearly ten weeks from becoming operational with A Flight 84 Squadron until it stalled and crashed on June 4, 1918.  She was flown by Lt. L. de S. Duke who claimed a Fokker Triplane kill on April 23, 1918.  The next pilot, Lt. H.W.L. Saunders, achieved six of his fifteen victories in this machine.  The bottom photograph catches seven pilots taking some rest and relaxation at Flez in March, 1918.

The late Dieter H.M. Groschel and Elimor Makevet are up next with Part III of an article on the Royal Prussian Flieger-Abteilung 301’s activities in Palestine during WWI.  This article includes 23 period black and white photographs over 19 pages.  This includes Endnotes, Appendices, and Tables, with one table addressing the Flieger-Abteilung 301 ‘Pascha 11’ roster.  Page 53-051 is topped off with a clear black and white photographs of Lt. d R Karl Meierdirks in his Albatros D.v of Jasta 12 in 1917 before he arrived in Palestine in the Spring of 1918 to lead Jasta 1F.

Mick Davis compiles a listing of RFC Curtiss Machines in the UK in the semi-periodic department: Logbook.  Essentially in tabular format (see Page 53-066) the next four pages lists the Curtiss aircraft that served in the UK with the RFC.  Joe Moran highlights market news and Bob Gladding builds a vacuform; the Joystick 1/72 AEG C.IV in F-A 301 markings as used in Palestine.  Joe Moran performs major surgery on the Red Star / Emhar 1/72 Anatra Anasal DS, a build he originally perceived as ‘easy’.  The Bookshelf section is a review of WWI aviation specific books and magazines with this issue totaling ten.

As usual, this is another excellent issue from Cross & Cockade and I am always impressed with the quality of the articles, both from a research perspective, and readability. The period pictures, maps, and drawings in this journal come off looking great thanks to their printing on the journal's glossy paper.  If you are into early / WWI aviation; this journal is an incredible source of information that will have you on the edge of your seat waiting for the next issue. My thanks to Cross & Cockade International and IPMS/USA for the chance to review this great issue.