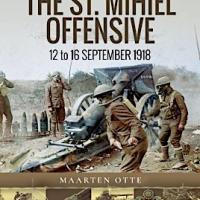 The St Mihiel Offensive, which took place between the 12th and 16th September 1918, was the first full scale attack that was under the direct command of the Americans, in the person of General J. Pershing. He combined his command of the First (at the time the only) American Army with that of Commander in Chief of the AEF, a tremendous burden.

The St Mihiel Salient had its origins in the early fighting of the war and had been stabilized by the end of 1914, although there was fierce fighting there in the first half of 1915 as both sides jostled for position. The high ground of Les Eparges became notorious for the intensity of the mine warfare that took place below it, extensive remains of which can be seen today.

The American attack (with the assistance of a French Corps) was an outstanding success and the Germans were forced into a rapid withdrawal to the Michel Line, a strongly defended position that formed the Hindenburg Line in this area. On the other hand, the success was in part assisted by the fact that the Germans intended to withdraw from the exposed position of the Salient back to this line, the only question being the timing of such a move. Historians argue about whether the move had actually begun or not, but the reality is that senior German officers knew that it was imminent and certainly some heavier artillery had already been pulled back.

Pershing’s original hope had been to continue the offensive to seize Metz, crucial rail links, and economically vital areas to the German war effort. In fact any such attempt would have taken weeks of preparation, as even a casual examination of the Michel Line defenses still existing today would show.

It is probable that relatively easy success here led to overconfidence amongst some that the next offensive, the Meuse-Argonne - to the north and scheduled to begin on the 26th, would have a similar outcome. If so they were in for a rude awakening.

This book is profusely illustrated with contemporary photographs and numerous maps, the narrative supplemented by a number of firsthand accounts. The whole is supported by several walking and car tours.

This is the latest in a series of Battleground books by Maarten Otte on the American Expeditionary Forces, with several more in preparation.

Maarten Otte is a long-time resident of the Argonne. Growing up in the Netherlands with a fascination with the Great War, particularly the role of the United States. He has published books on Nantillois in 1918 and on US Medal of Honor winners.

This is a fascinating book, well written in a clear and concise manner. The text is supported with many black & white images of the places, people, weapons, and results of combat to the geography of towns and villages. I found the descriptions of the Car Tours and Walking Tours very entertaining, and when I could couple the text with a Virtual Tour on Google Maps the result was quite a number of hours with the computer and book being the center of attention. This book is highly recommended for the reasons stated in this paragraph.