The Indo-Pakistani War of 1971 Volume One: Indian Military Intervention in East Pakistan 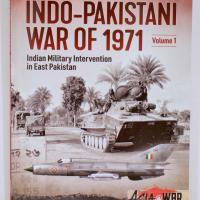 Ravi Rikhye is an international affairs and military historian with a remarkable academic background. He holds seven master’s degrees and is currently working on his doctorate. His career has also included the completion of more than thirty books. For the first offering in the Helion and Company’s new Asia@War book series, Rikhye has authored a two-part history of the 1971 Indo-Pakistani War. This review looks at the first book about the Indian Military Intervention in East Pakistan (now known as Bangladesh). The second work addresses the contemporaneous Showdown in the West (along the current Indo-Pakistani border).

Most historians have looked at this conflict as a short, two-week war between India and Pakistan in December 1971 that precipitated the independence of East Pakistan. Rikhye takes a broader and longer look at this war and places it within the framework of post-colonial destabilization and superpower dynamics. He argues that this war was basically inevitable, and that India’s military victory was a foregone conclusion.

When the British granted India its independence in 1947, the former colony was partitioned into two Moslem regions (West and East Pakistan) and a Hindu region (India). Tensions between the two-part Pakistani state and India simmered, leading to an inconclusive military confrontation in 1965. Rikhye argues that West Pakistan’s administration of the Eastern region prior to 1971 was both inept, unfair, and unsustainable. This was not only because of the peculiar geographical construction of a two-part Pakistan but also due to the ethic bias the Western Pakistani Muslims had towards the Eastern Bangladeshis, who they regarded as inferior. Consequently, the military deployment in Eastern Pakistan was weak and poorly resourced. Rikhye says that the Pakistani army was exhausted and without reserves because it had been fighting a de-facto civil war with Bangladeshi rebels within East Pakistan for almost a year prior to the hostilities with India. He also shows that the Indians saw this situation and made extensive preparations to take advantage of it.

Rikhye demonstrates that India formed a substantial para-military force from Bangladeshi refugees which proved to of great military advantage once the Indian invasion began. The Indian military was much stronger than the Pakistani forces deployed in East Pakistan, and once the Indian government decided to pounce, they quickly defeated the Pakistani forces. Rikhye argues that the Indian generals were originally ordered to occupy only a strip along the border of the two states, but one audacious Indian general took the initiative to proceed rapidly into Dacca, the East Pakistani capital, as the Pakistani army crumbled before it. The ensuing comprehensive Indian military conquest led to the political independence of a new state, Bangladesh, one which posed little military threat to India.

Rikhye makes a considerable effort to show how this regional war was influenced by the larger international political dynamics. Pakistan and India were both courted by the superpowers. Both countries received weapons from the West as well as from the Soviets. India was very wary of the Chinese in this era and synchronized their incursion into East Pakistan with weather conditions along the Sino-Indian border that were unfavorable for a Chinese invasion. The movements of the US Navy were also monitored by the Indians, as the Pakistanis had vainly hoped for support from the United States.

Rikhye does not limit himself to the strategic and tactical aspects of the war. He discusses the human aspects of the war as he tells of the massive refugee influx (60,000/day) from East Pakistan into India. He is very blunt in his appraisals of the leadership decisions and personal behaviors of selected generals. Unfortunately, he seems to dismiss the alleged 300,000 rapes perpetrated on the women of Bangladesh during this war by the Pakistani army and offers no defense for his position. He also discredits the claims that as many as three million Bengalis were killed by the Pakistanis during the insurrection. However, he does acknowledge the ferocity of the fighting and notes that the Hindu population of East Pakistan decreased from 30 percent to merely 10 percent in only two years. To Rikhye’s credit, he makes a special effort to tell the stories of individuals on both sides who were recognized for their extraordinary courage under fire.

The author gives a detailed account of the actual fighting in East Pakistan (air, ground, and naval), with separate chapters for each geographical sector. His tables and maps, which depict the individual unit deployments, are very helpful. Rikhye liberally provided pictures of the leaders, the equipment, and the action with over eighty photographs. Both sides used military equipment supplied by the world powers, primarily from the British, Americans, and Russians. He has included excellent color illustrations of the aircraft (MIG-21s, Hunter F.Mk 56s, F-86s, etc.), armored vehicles (PT-76s, M-24s, and T-55s), and uniforms. His photographs and illustrations also capture some of the ad hoc field-applied camouflage schemes on some of the aircraft and armored vehicles.

Rikhye does not go into much detail regarding the equipment configuration details many modelers would like to have, such as variants and modifications, but he provides enough reference material for the modeler to have a good starting point for a modeling project. No discussion of model kits or accessories is incorporated in the book. Neither are photographs of any completed models of the equipment or personnel involved in the fighting included.

Special thanks go to Casemate Publishers for donating this book for review. Natalie Mathes provided the photographs accompanying this review article. Rikhye’s Indo-Pakistan War of 1971: Indian Military Intervention in East Pakistan is an excellent, easily readable resource for those interested in this complex post-colonial conflict. It provides valuable reference material for the modeler interested in modern armor, figures, or aircraft. This work whets one’s appetite for more accounts of these poorly understood regional wars in modern Asia.