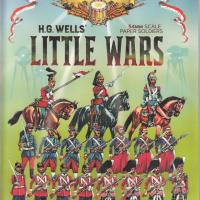 Inside the front cover is a listing of other titles in Helion & Company’s “Paper Soldiers” series. Interested in the Civil War? Which one, American or English Civil War? They have games for both. Roman legions? American Revolution? Trafalgar? The Spanish Armada? It’s all in there.

This book is based on H. G. Wells’ 1913 book which gives rules for movement and battle with miniature armies. The book is subtitled “A Game for Boys from twelve years of age to one hundred and fifty and for that more intelligent sort of girl who likes boys’ games and books. “

I had a bunch of toy soldiers when I was a kid. And at one point I got a toy 105mm howitzer which would fire small wooden bullets. So I set up two sides and shot them with the 105. I didn’t like the fact that the small wooden shell would bounce off some soldiers without knocking them over. I graduated up to using those pencils you get at the golf course for score keeping. They worked.

Later, I played Avalon Hill board games, particularly Gettysburg. Also, Risk was a favorite. When my friend and opponent (He beat me SO often) Bill Tometich told me that there was a magazine with a game in every issue, I subscribed to Strategy and Tactics Magazine through the 80’s.

So here we are back at the idea of shooting a cannon at the enemy soldiers on the floor.

What Make This Book Special

Peter Dennis does the artwork for this series of books. You get multiple pages of paper figures to use in the games. The idea is to scan and print color copies of the pages onto heavy paper, then cut the figure out and fold it, so the front and back align. I show several pages of figures, infantry and cavalry, plus a Zouave I printed, folded, cut out, and assembled.

But wait, there’s more! Also included in the pages are a cannon which can be printed, cut out, and assembled. With a rubber band moving the breech, the cannon can fire paper balls at the enemy. So we can go back to the original Wells concept of war gaming.

And even more! In addition to the soldiers, cavalry and civilian figures in the book, there is a Martian Tripod, in case you decide to do a “War of the Worlds” scenario.

Recommended to anyone who’s interested in miniature war games.

This book is a really neat trip back in time for me. The idea of shooting at soldier figures goes back over 60 years in my life. The figures are really well done. I had minimal trouble with the figure I glued and cut out. If I do another, it’ll be even less trouble.

Thanks to Casemate for providing the review sample to IPMS.

Ed. Note – Unfortunately, shortly after writing this review Jim Pearsall passed away. A long time member and historian of IPMS, a dedicated member of the Review Corps, and friend to us all, Jim will be missed.