Images of War The Destruction of 6th Army at Stalingrad 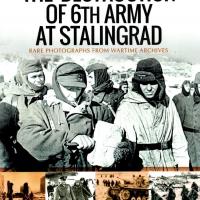 Thank you Bill & Phil for all you do for the Reviewers and for the opportunity to review this publication.

Pen & Sword has released another outstanding book belonging to the Images of War series. As with other Images of War publications, it is a photographic essay detailing the pathway of General Paulus’ 6th Army annihilation at Stalingrad.

The book begins with a prelude which provides important information about the movements of the three German Army groups in Russia during 1941, and how and why the command chain changed allowing Friedrich Paulus to be appointed command of the 6th Army. Through four chapters, the reader is taken via photographs and text through the struggles of the 6th Army in their quest to fulfill Hitler’s misguided dream of conquering Stalingrad and ultimately Russia.

Chapter One The Road to Hell is set in spring 1942. It gives a thorough overview of how Hitler was in complete command of the army, his determination to obliterate the Soviet army and the relatively quick, easy successes the German army has having in eastern Russia. It is interesting (and important) to observe in this fine collection of photographs how the German soldiers look relatively clean, have nice equipment, plenty of ammunition, radios and food. As Chapter One leads into Chapter Two, the photographs begin to change considerably.

Chapter Two The Siege of Stalingrad begins in August, 1942 when General Hoth’s 4th Panzer Army launched an attack against the Russian 64th and 62nd Armies. As this chapter guides the reader through the events of August, September & October, the sense of impending failure is felt as this chapter explains the high cost of human life, the strong resistance the Germans were encountering, and how the Germans were worried about the onset of winter. The accompanying photographs show much more action, and the reader visualizes the rough conditions-the smoke, mud, exhaustion- the Germans encountered.

Chapter Three Encircled sets the stage for the end. The XLVII Panzer Corp was quickly dispatched only to find that most of the panzers which had been sitting idle from months had their electrical wiring eaten by mice. Of 104 panzers, 39 were operational, but 34 of those quickly developed electrical problems and were unusable. From this disparaging beginning, the reader is brought to November when the Russian forces mounted an enormous counteroffensive against the Germans called Operation Uranus. This operation ultimately allowed Paulus’ troops to become cut off and surrounded. The series of photographs here are all from winter and show haggard, worn-out and splintered German troops. Gone are the images of long columns of marching soldiers and mechanized equipment. Rather, the reader sees small groups of soldiers desperate to hold on with what they have.

Chapter Four Destruction of the 6th Army tells the reader how General Paulus was pleading with Hitler that his army was on the brink of destruction. The 6th Army was starving to death, yet Hitler believed they could hold out until Spring. On the morning of January 8, 1943, Russian representatives delivered an ultimatum to Paulus, who submitted it to Hitler, again pleading to be relieved of the situation. Hitler refused. Many important events are laid out in sequence so that the reader understands how the 6th Army finally collapsed, and the horrible aftermath which was to follow.

As other reviewers have pointed out, the modeling world has an abundant supply of books about German tanks, uniforms, and weapons. These books are indeed valuable references which help model builders create historically accurate models. But the Pen & Sword books, especially the books belonging to the Images of War series, help model builders understand the history behind the models they create.

The advantage the Images of War books have, as evident in this latest publication The Destruction of the 6th Army at Stalingrad, is that the reader is able to gain a very complete understanding of history from a combination of quick reads and never-before-seen photographs. I very highly recommend this book.

Thank you to Pen & Sword for publishing such a fine book, and thank you to IPMS for the opportunity.