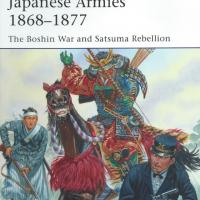 Bottom Line Up Front: This most recent addition to the Osprey Men-at-Arms Series does its best to make sense of a confusing subject, to the Japanese civil wars of the 1860s and 1870s period. It is well illustrated and provides rudimentary information that is fairly easy to understand.

Japanese Armies 1868-1877 describes the conflict between the fledgling Japanese central government and provincial Samurai clans. It narrates the central governments struggle to create a modern military from the feudal samurai military system and the resistance to this process by the conservative Samurai leaders.

The book provides a basic chronicle of the civil war between the government armies and the provincial armies of the feudal Samurai leaders. The weakest point of the book is the lack of maps illustrating the troop movements throughout the various campaigns. Readers who are unfamiliar with Japanese geography will be at a disadvantage.

The author included an excellent bibliography which contains most of the premier works on this period of Japanese history. There is also a comprehensive index which makes this book a useful research tool.

There is a serious error on page 10 where conservative feudal samurai military leader Saigo Takamori is described as a daimyo, or ‘feudal lord’. Takamori was actually heir to a fairly low-ranking samurai in southern Japan.

Japanese Armies 1868-1877 is about the length and depth of a master’s-level term paper, so this is not an in-depth work. Still, it is worth the price for someone wanting to take a first look into the period or to brush up and clarify their knowledge.

Many thanks to Osprey for the review copy.