The Waffen-SS at Arnhem 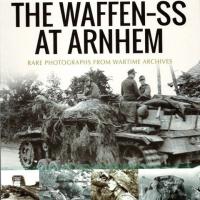 The 1944 Arnhem airborne operation, immortalized by the film A Bridge Too Far, will forever be remembered as a great British feat of arms. British and Polish paratroopers displayed outstanding courage and tenacity in a desperate last stand situation. And yet, as this book describes, the plan was fatally flawed as the 9th and 10th SS Panzer Divisions were recuperating and concealed nearby. What followed was a bloody battle of attrition the result of which was arguably inevitable.

Drawing on rare and unpublished photographs, this Images of War series work reveals the historical combat record of the 'Hohenstaufen' and 'Frundsberg' divisions. It describes the intensity of the fighting in and around Arnhem between these elite SS and supporting units against a lightly armed yet equally determined enemy. Despite the war being only months away from its end and the defeat increasingly certain, the SS soldier remained fanatically motivated. This superbly illustrated book with its well-researched text and full captions captures the drama of that historic battle for a bridge over the Rhine.

Ian Baxter is an avid collector of WW2 photographs. His previous books in this Series include Hitler’s Boy Soldiers, Nazi Concentration Camp Commandants and German Army on the Eastern Front – The Advance, German Army on the Eastern Front – The Retreat and Nazi Concentration Camp Commandants, The Crushing of Army Group (North) and the SS Waffen Division series including SS Leibstandarte Division and SS Totenkopf Division At War. He lives near Chelmsford, Essex.

In his introduction the author lays out his basic outline in which he lays out the timeline for the action that was about to take place in the small towns surrounding Arnhem during September 1944 and would soon consume two SS Panzer divisions that were resting in the woods. The book provides a concise history of the ensuing battle in which these two divisions hoped to capture “as much of Europe as possible.” The two divisions, the 9th Panzer ‘Hohenstaufen’ and 10th SS ‘Frundsberg’ are the key participants and the basis for almost all the photographs in this richly documented book.

My wife and I spent several days in the Arnhem and Oosterbeek while in Holland a few years ago, which afforded us a great opportunity to see these communities in a very personal way. While the Arnhem bridge has been replaced with a larger modern structure, we were still able to see many of the battle sights from Operation Market Garden for ourselves. We spent several nights in a local residence and heard many stories about the well-known battle. A highlight of our walking tour was our visit through the Airborne War Cemetery and the Villa Hartenstein. The significance of the Hartenstein is that it served as the headquarters for both the Germans under the command of Field Marshall Walter Model and then the British 1st Airborne Division under General Roy Urquhart. We left with greater impression about the war effort from both the Allied and German side, and especially the British contributions, as evidenced by the large number of Victorian Crosses awarded to those buried and immortalized in the small cemetery.

This book is primarily a collection of photographs. Only approximately 30 pages of the total 112 pages contains the entire text for this book.

As an amateur armor modeler, I was most by the large number of the armor tracked vehicles heavily camouflaged with sections of deciduous and conifer tree limbs. I’ve attached several images to better illustrate this aspect of the German defensive effort.

You will also gain a much better understanding of the British and Allied efforts from reading the brief written narratives which precedes each chapter and accompany the photographs.

I have also attached several JPG images to help illustrate some of the many great photos found throughout this book.

My thanks for this review book to Casemate Publications, Pen & Sword, and IPMS/USA for my opportunity to review, read and enjoy it. I thoroughly recommend this book for all scale modelers as well as those interested in WW II history as I suspect it will provide the basis for many dioramas and interesting armor paint schemes.