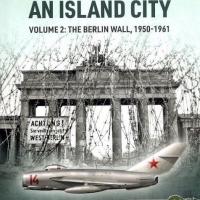 "From the moment the DDR was formed in 1949, many of its citizens chose to leave to start a new life in the West. By the mid-1950s, the trickle had turned into a flood as large numbers rejected Walter Ulbricht’s Communist paradise. His ‘Workers’ & Peasants’ State’ could not afford to lose the skills and productivity from these key workers, so he proposed a radical solution – physically stop them leaving by fencing in the whole population. His plan would fortify the Inner German Border from the Baltic to the Czech border and would build a Wall around West Berlin to stop the flow of East German refugees to the West. It was a bold, innovative, and desperate move from a morally bankrupt and failing state.

This book explores the background and build-up to this monumental decision, reviewing the dramatic geo-political developments of the 1950s and early 1960s as international tensions threatened the post-war peace. Berlin was becoming the front-line in the new Cold War and would witness some of its most dramatic and dangerous moments.

It examines in detail how Operation Rose, the August 1961 operation to close the border between East and West Berlin, was planned and executed and looks at how the world reacted, including the tense stand-off at Checkpoint Charlie in October 1961 between American and Soviet tanks, which could have so easily escalated into the Third World War.

The book looks at how the East Germans developed and ‘improved’ the Wall over time with brutal efficiency, creating a highly fortified barrier, manned by elite troops. Despite that, many brave and enterprising individuals risked everything to try to escape to the West over, under or through the Wall. Some made it, but many were captured or killed attempting it.

This is the second title from the author in a series of books on Cold War Berlin. It concentrates on the years 1950 to 1961, picking up where the first book finished, but also looks at developments of the Wall right through to the 1980s. The text is accompanied with numerous photos, maps, diagrams, and illustrations, which help tell this fascinating story."

I first traveled abroad and into Germany to visit some of my extended family, whom I had never met, during the Spring of 1983—almost 40 years ago. This was an extremely pleasant and happy trip for me. My grandfather’s name was Oberbillig and has quite a bit of history going back early 17th century.

Germany and particularly Berlin are wonderful places to visit or live with the agricultural, forests, automobile manufacturers, foods, wine and not but least German beir! As a proud third generation German American, I am always exploring Germany’s social and political history which has really been in a state of almost constant turmoil the rise of the German Empire in 1871, which was followed by War to End All Worlds (World War I), the Weimar Republic, the dark Nazi period and World War II and finally the Occupation and the division of post-world war into east – west Germany.

When I had my first opportunity visit Germany in 1983, I was amazed at the ‘new’ and modern Germany, though the differences between the then two Germanies couldn’t have more apparent. While West Germany was well on it’s way through it’s reconstruction whenever I able to see the East Germany, it almost appeared to just having been bombed. There were lots of war time ruble and no signs of anything being done to return to even to pre-war period. Almost anything made of steel or other metals had stripped away and apparently shipped back to Russia.

However, I was privileged to have an invitation to travel into central corridor and in through East Germany and onto Berlin. Again, several observations: I was shocked by the sight of hundreds of Soviet tanks along the rail sidings. Most were covered with a gauze-like covering, though occasional holes revealed they were in fact large tanks (possibly T-54 or later models). After crossing a double fenced barrier came the ‘death zone’ of about 100 meters, followed by another double wire barrier and the high boarder watch and guard towers.

Because this was American military train, we were briefed that we were to stay on the train during entire transit across the frontier. The East German guards walked through the cars for brief review and if anything were to happen our train would be move to a siding and held there until the issue was resolved. The trains engines were removed and only East German engines were permitted to transit the corridor.

One of the scariest aspects of our transit into Berlin was the fact that we arrived at the East German border as the sun set and we were told that we were ‘permitted’ to visit the duty free store. I was told to never leave the train from the four cars in our train, I saw no other people taking the ‘opportunity’ to visit this store. As our train started to slowly pull, we saw the store clerk turn off the few lights in the store. It then seemed that the whole village of Helmstadt was lite by about 4 or 5 small street lights. Throughout the remainder of our trip through East Germany there were very few lights until we started to arrive in the outskirts of Berlin. Another aspect worth mentioning is that and across the border in East Berlin all of the street lights, those along the Berlin Wall and at the watch towers a peculiar yellowish color and in stark contrast the very bright lights across the border in West Berlin.

I visited Berlin last in 2018 and found it to have undergone a massive redevelopment in the city’s physical appearance. I couldn’t even find any of the old Soviet era drab and crumbling structures. The only noticeable remnants of the prior walls are the marker bricks along original Berlin wall path. If you’re not aware of those path lines or don’t look down to find them, you’d never know where they once were or that freedom of travel past that line once was literally punishable by death. There few small sections of the wall (both in Berlin and in other German cities) as reminders what Soviet domination meant. I’ll never forget.

For those interested the author has previously published another book covering the late 1940’s up through the period where this book picks up the story. You’ll find it under the Helion & Company lists of books, as “Cold War Berlin An Island City Volume 1.” Also worth mentioning, I have seen at least one 1/35th scale model of a small section the Berlin Wall, which could provide the basis of a small diorama scene.

I have also attached several JPG images to help illustrate some of the great illustrations and photos found throughout this book.

My thanks for this review book to Helion & Company and IPMS/USA for my opportunity to review, read and thoroughly enjoy this book and the online versions. I certainly brought back many memories for me. I recommend this book for all scale modelers as well as those interested in modern German history and the terrible price many Germans paid for their freedom in the 1950’s to early 1960’s.