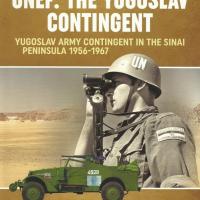 Some time after the end of World War 2 and the establishment of the U.N., one of the first opportunities for the fledgling organization to flex its peacekeeper muscles was on the heel of the 1956 Arab-Israeli war. This serious flare-up between Israel and its neighbors – the first really serious conflict of many to come – was seen by the world as a definite threat to the stability of the entire region. A multinational force of British, French and numerous other participants was hastily assembled and dispatched to try and create a safe zone between the hostile forces.

Tito of Yugoslavia, who was even then trying to establish international recognition and legitimacy for his communist government, looked on this multinational effort as an excellent prospect for increasing his country’s standing, and volunteered a small contingent of Yugoslavian troops to go to the Sinai Peninsula and help serve in this laudable effort.

This book is an in-depth study of the entire span of this eleven-year effort, which only concluded when the Arabian forces of the UAE basically pushed the international peacekeepers aside in their misbegotten desire to start another brawl with Israel in 1967. Unfortunately for them, we all know now how well that turned out for them.

The narrative begins with the hasty deployment itself and all the problems and issues encountered by the Yugoslav contingent as they were forced to adapt to a very foreign environment under extremely trying circumstances. Amazingly, their casualties remained remarkably low over the course of their deployment and they were never involved in anything resembling a full-fledged firefight, to their credit.

One of the more amusing aspects for me was how the Yugoslav troops were changed by their encounters with the VERY capitalist environment they were thrown into after decades of communist austerity. This book covers all the details, even including tales of bordellos and alcohol and other “degenerate” aspects of life, and it’s telling that this peace-keeping operation eventually turned into something of a plum assignment for members of the Yugoslav army, even at the cost of a reduction in rank for each applicant in order to keep salary costs down.

As stated before, this unit remained on station until 1967, when they were fairly gently pushed aside by UAE members looking for a fight with their Israeli neighbors. This book provides a quite detailed study of the entire operation from beginning to end, and gives you a real feel for conditions and circumstances of the time. I found it to be a compelling read and certainly broadened my own understanding of this moment in middle eastern history. I recommend this book to anyone interested in this era and location – it’s inarguably one of the better studies of this type of subject.

My thanks to Helion and Company for the publication of this interesting document and to IPMS/USA for a chance to read it. Fascinating!