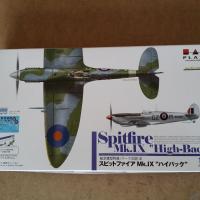 Supermarine’s Spitfire was one of the classic fighters of World War II. Produced in different Marks (the British name for versions), the Spitfire served from the beginning of the war until the end. The Mark IX was originally developed as a stop-gap measure in response to the German introduction of the Focke-Wulf FW-190, but later grew into it’s own as a fighter aircraft.

Platz’s Mark IX kit is nice, with finely engraved panel lines and no visible flash. There are 152 parts molded on 5 grey plastic sprues and one clear sprue, of which approximately 57 are used in various Mk IX versions and possibly other Spitfire versions as well. There are 2 Mark IX versions with 4 paint schemes that can be built using this kit.

The instructions are not set up in a step-by-step from start to finish. Rather, the instructions are set up to build subassemblies prior to assembly of the airframe, before putting the final touches onto the model. One word of caution here – if you wish to show external stores on the model, you will need to drill out the mounting holes, as all the mounting holes are intentionally flashed over.

There was one mismatch on my sample. That was on top of the fuselage aft of the top engine cowlings (see photo) and is very noticeable. It creates a “stepped” appearance when on the actual aircraft there is a smooth transition from the cowls to the fuselage.

When assembling the wings to the fuselage, the instructions show the two radiators (parts number B35, B46, B48, B50, and B51) and while they are not clear on this, I highly recommend assembling these radiators on the wing versus as separate units, to make parts alignment much easier.

Another feature that I liked about this kit is the cockpit – you can position the door and canopy in two different positions – closed up or open. The detailing inside the cockpit is great for a 1/72 scale aircraft, and with some fine work, can really be outstanding.