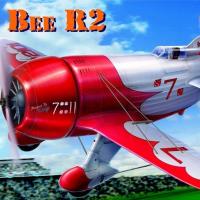 Dora Wings is a relatively new company with a number of low-pressure injection mold releases. I contacted them and we were fortunate to receive two new kits - a P-63E King Cobra (reviewed elsewhere on this site) and the iconic Gee Bee R2 racer. There’s plenty of history to be found regarding this little bumblebee of an airplane - maximum sized engine stuffed into the smallest possible airframe - so let’s get right to the build.

Kit contents include a very nicely detailed P&W Wasp radial, a very complete cockpit section (most of which becomes invisible under the tiny canopy) and a sheet of crisp p/e detail. A single sheet, 4 sided color instruction sheet includes a painting guide, and a sheet of masking media is included to allow you to recreate the scalloped paint scheme.

Construction starts with the cockpit. Stacking the three fuselage frames and all the associated stringers is a bit of a challenge; this has to be done incrementally as the entire assembly is pretty fragile. It’s also possible to orient one or more of the frames incorrectly; the instructions are a bit on the fuzzy side. Add instrument panel, throttle quadrant, pedals, and stick and you’re done - then carefully trap this spider web of parts into the three pieces of fuselage, adjust, and glue. I used Tamiya Super Thin Cement for most of the assembly, resorting to thin CA when necessary.

I realized that once assembled, there would be little to see of the cockpit, so before I buttoned it up, I cut away the molded-in access hatch on the right fuselage half and scratch build a new door, replicating the external stringers using stretched sprue, and creating a frame on the back side with Plastruct strip stock. DoraWings provides you with a door, but it is oversize in thickness and the reinforcing ribs are not present.

I moved to the engine next, using online photos of Wasp engines to replicate colors. I experienced some fit and alignment issues between parts. One real challenge was aligning the two ring exhaust parts, whose attachment locations aren’t clearly shown on the instruction sheet. I tried various orientations until I got both of them to fit, but I can’t guarantee that it is correct.

The airframe basic assembly went quickly, with very few gaps requiring use of filler. I used CA and Perfect Plastic Putty to fill some small joints here and there, but a few of these may have been induced by me.

Painting started with a coat of Tamiya Grey Primer out of a rattle can. Confession - I am not diligent about washing kit parts before painting and this bit me on the build - whatever release agent Dora Wings is using is pretty pervasive, and I had a lot of issues with fisheyes and bubbles. It took several wipe-downs with diluted Windex and then alcohol to remove the contamination after the fact, and my white paint job is iffy at best. You can still see some imperfections in the accompanying photos. If I was building the kit for contest entry, I would strip and repaint it, but I was rapidly running out of time to finish the review under the deadline.

After several base coats of white, I moved on to masking prior to red paint application. While the masks are called out in the paint guide (see photo), I found that there’s really no positive location features on the scallop masks or the large fuselage masks, and there was a lot of trial and error involved in applying them. I ended up using a lot of tape in addition to the masks to ensure correct coverage. In addition, and possibly caused to some degree by multiple attempts to get the masks in the right location, I really struggled with bleed-through on the fuselage sections that incorporate the external stringers. The masks were too rigid to snuggle down into the small gaps between stringers. This resulted in some touchup after the masks were removed. In addition, I was left over with several small masks that I think go around the wheel spats, but for the life of me I couldn’t figure out where they actually go.

A coat of Vallejo Red was applied and as mentioned, some cleanup was required after the masks were removed. I then shot a coat of Pledge Multi Surface over the entire model, allowed it to dry for several days, and applied the very nice decals. These were challenging to move into position once on the model, and I had some anxious moments with several of the small sponsor decals, but I have to say that once in place they really laid down nicely. Another coat of Pledge MS was applied, the various subassemblies were installed, and the remaining p/e parts - the wing bracing wires and struts - were added. The bracing wires are very thin and fragile, and as I was removing them from the metal sheet, they “sprung” badly probably due to prestress from the chemical etching operation. You can see the results in the photos - again, if I were building for a contest, I would replace the photoetch parts with sprue or rigging wire.

I wish the canopy parts were less murky and thinner - a vacuformed replacement would be a great aftermarket addition. All of the nice interior work is pretty much invisible at this point.

Overall, this builds up into a nice replica of the Granville Brothers’ creation IF the modeler works to overcome some of the issues noted above. Struggles with paint adhesion, iffy part locations, and making must be addressed, so I would recommend this kit to the experienced builder who isn’t relying on everything going together without some interpretation and fiddling.

My thanks go out to Dora Wings for supplying both kits.