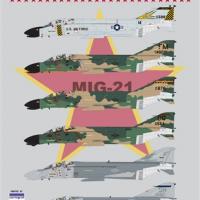 Speed Hunter Graphics is a new decal source and is a division of the well-known and respected Reid Air Publications business. IPMS is very pleased to be able to review the Premiere Decal offerings from Speed Hunter in 1/48th scale, that being the markings for the F-4C and F-4D, reviewed here.

These decals can be used on any 1/48th F-4C or F-4D, but reading some notes about the design of the decals indicated that they were geared up for the Academy kit. That having been said, one does not need to limit their use to that particular kit.

Speed Hunter Graphics has done a significant amount of research on the markings and their placement for the aircraft represented on these two decal sets. In order to get a sense of the authenticity of the decal markings I chose a few of the subject aircraft and conducted a Google Images search. In my limited research I found no errors or anomalies in the markings, stencils, or the locations of the decals as pointed out by the decal instructions. Good Job SHG!

I was pleased to find that Speed Hunter Graphics used Cartograf to print the decals. I’ve never been disappointed with a Cartograf decal and these two sets are no exception. I use some rather obvious and simple characteristics to determine the quality of a set of decals and Cartograf passes all those tests with outstanding marks. Presented below are the usual benchmarks by which I judge the quality of a decal or decal sheet.

Authenticity of the markings

Speed Hunter Graphics did an outstanding job in their research and preparation of these two sets of decals. As mentioned above, I found no errors in the color, size, or placement of any of the decals for which I researched.

Color consistency across the markings

We’ve all seen it, a fuselage band, or set of invasion stripes, or other “rainbow” type decals in which the colors on the decal actually lose their intensity as one approaches the edge of that color. For example, on the #48002 sheet there are some decals that sport five colors in the shape of a partly opened fan. The darker colors are usually not the problem but when one looks at a yellow or white stripe on such a decal, the color loses intensity along the border between it and the next color on the decal. These Speed Hunter Graphics decals do not suffer from that regrettable condition. The yellow band is a consistent and uniform intensity, as are the other, darker colors.

Some decals look great but when they are applied to the model and then moved into their final location, they develop a tear or chip, or simply split and shatter. This problem is really an annoying one as it causes a delay in the completion of the project, or worse, damage to the decal which can’t easily be repaired. No such issues were found with the test samples from these Speed Hunter Graphics decals that were applied to a “prep ared and painted” test surface. (That prepared and painted test surface is actually the assembled wings and fuselage of a Do-217 that was pulled from a scrap heap, cleaned up, and painted using Model Master Enamels).

In order to test these Speed Hunter decals I applied a sample without using any setting solution, then another with Micro Set, then Sol, and finally Solvaset. No damage to the decals was done by any of these solutions, nor were the more powerful solutions necessary. The sample decals settled down over the raised detail on the test surface very nicely.

These initial releases by Speed Hunter Graphics are, in any sense, excellent decals and are, hopefully, the first of many offerings from Speed Hunter Graphics. Both sets of decals, 48001 and 48002 are highly recommended due to their reasonable price, high quality, and authenticity of the markings. Thanks to Speed Hunter for providing this set of decals to IPMS for review. Visit the user friendly Speed Hunter website for images of these decals and reference materials included in the decal product packets.