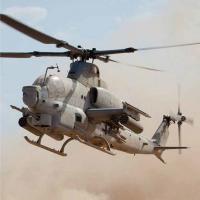 The Kitty Hawk AH-1Z was ready for decals.

So, on to WW Decals 48-08. One word of caution; decide which aircraft you want to model BEFORE you paint! Floyd gives you eight different choices of aircraft, and there is something different about the color demarcation lines or non-skid paint or patches of other color paint on each aircraft. I didn’t have that forethought, so the end result was there was one aircraft that I could depict, and that was NO. 41 of HMM-268 (REIN). The sheet also contains two sets of common markings.

I had used Mr. Color 308 FS36375 for the lower gray and Model Master 1721 FS35237 for the upper gray. Floyd had said that he thought he had printed the dark gray of his decal sheet a little bit light and I should lighten the 36375 a little. I opted not to, and he may have been right, but I’m not disappointed at all with the result. I sprayed the aircraft with Tamiya’s X-22 Clear Gloss beforehand, which I let cure for a couple of days. I applied the decals using warm water and no setting solution at all. At first I was skeptical, as they looked a little thick and grainy. But, after setting overnight, there was no silvering; they laid down snugly and conformed with panel lines very nicely. I surprised myself and did all of the decals in one session. The only problem I had was in the application of one of the buzz numbers, the decal turned itself into a cork screw, never to be flattened out again. And, of course, it was the only aircraft with the number 7 in its serial number. I e-mailed Floyd “Help” and he came through for me two days later with a replacement sheet, so I was able to finish it up. I had one of the eight “slime” lights from the kit decal sheet do the same, so I had to wing that one.

The kit was an enjoyable build and the Werner’s Wings decals were in keeping with the high quality of all of their decals. I want to thank Floyd Werner and IPMS/USA for the opportunity to review this fine product.