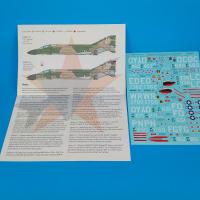 The air war in Vietnam was a departure from what the United States had experienced in prior conflicts. The over-dependence on air-to-air missiles, micromanagement of operations from the White House, and countless constraints and rules of engagement put American aircrews at a distinct disadvantage against North Vietnamese adversaries. Despite those limitations, the US forces adapted to circumstances, exercised some good old American ingenuity, and managed to generate several aces and some legendary missions based on unorthodox tactics. A common thread in the making of these aces and employment of these tactics was the F-4 Phantom II.

This decal sheet from Werner’s Wings, its first in a series featuring the F-4, showcases multiple Phantoms flown by Air Force aces Captains Steve Ritchie, Chuck DeBellevue, and Jeff Feinstein. Also, included are markings for Colonel Chappie James’ aircraft during Operation Bolo, Capt Dan Cherry from Dogfights TV series episode “Hell Over Hanoi,” as well as for a couple other aircraft. In all, markings for 11 different aircraft are included.

Werner’s Wings introduction of this great new Vietnam-era F-4 decal sheet has been very well received by this reviewer and another modeler in the household. We are most eager to churn out an F-4D and F-4E in the next few months to serve as canvases for these historically-significant markings. Based on this first-look, this decal sheet is HIGHLY RECOMMENDED for modelers wanting to build accurate depictions of U.S. Air Force Vietnam ace Phantoms.

Thanks to Werner’s Wings for the review sample and to IPMS/USA for the opportunity to provide this review.