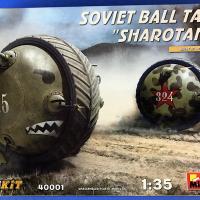 The normally super-realistic folks at MiniArt have loosened their imagination and wandered into the hypothetical with the first kit in their new What If...? Series, the Soviet Ball Tank "Sharotank". Possibly based on the Kugelpanzer, that Wikipedia describes as : "The Kugelpanzer (lit. "spherical tank") is a one-man tank built by Germany during World War II. It was captured by the Soviets in Manchuria and is on display in the Kubinka Tank Museum. There is no record of it ever having been used in combat".

MiniArt has a video on their website about the Sharotank, and cleverly inserts their kit model into period photos (or are they real?) showing the Sharotank after capture by the Soviets.

MiniArt also produces other versions of the ball tank:

The kit is newly tooled, molded in gray plastic, and comes on 24 sprues. Some of the sprues are small and contain as few as two parts. There are 221 parts with nice crisp detail and there are many small, fragile pieces. The instructions come in an 8 1/4 x 11 1/2 stapled booklet with 10 pages and 39 assembly steps. A color chart includes names of the paint colors and reference numbers for Vallejo, Mr. Color, Life Color, Tamiya, Testors, AK Real Color, Humbrol, Revell, and Mission Models. The assembly instructions are exploded CAD drawings in black-and-white and include diagrams of the sprues for identifying and locating parts.

There are two pages of colored profiles and marking diagrams. Marking options are included for six vehicles:

The marking and coloring variants are noted as being invented and not real!

Assembly begins with the engine and drive wheel for the Sharotank. The engine itself includes 19 parts, and detail paint callouts are included with the instructions. The engine parts fit together nicely to create a nice basic assembly. There are some options for additional wiring and plumbing if desired. The drive wheel for the exterior tread is attached to the back of the engine.

The seats for the crew members are very basic in their detail, and quite small in scale. The driver seat provides some levers, probably for gear selector and throttle. Pedals for the driver are installed on the interior of the shell but there are no connecting levers or cables, so I added some metal wire rods.

The engine is installed after the frame is assembled. There is a muffler for the engine that connects to an opening in the exterior shell. It would be best to wait until the new shell is ready to be assembled before installing the muffler to get them aligned correctly. I drilled a hole in the exterior shell where the exhaust pipe exits. Piping for the radiator is delicate and finicky, but generally ends up in the location of the radiator. Installing the shell with the radiator first will allow connecting the piping. The interior of this tank would be would have been a nasty space with the crew sitting next to the engine and the tread rotating around them.

The seats for the two crew members are installed around the outside of the interior frame before the exterior shells are installed. The interior of the tank is quite cramped and would’ve been very uncomfortable for the crew members. I installed some Master Box Soviet Tank Crew figures to give the interior further scale. The figures needed to be modified extensively to get their legs to fit in the cramped seats and avoid conflict with the cannons and guns.

Armament for the ball tank is two cannons and two machine guns, so it would be quite the prickly little vehicle. The guns have fairly nice detail and have ball mounts that allow them to move. The balls are assembled between interior and exterior flanges so very careful gluing is necessary to allow the guns to move. If you’re installing figures to the interior of the tank, check the clearance with the guns as it’s very tight. The tank driver gets his own little vision port to see where the tank is going. Vision would have been extremely limited but then it wouldn’t make much difference because there’s no apparent way to steer the vehicle, other than having the crew lean one way or the other.

Each half of the ball tank shell has an access panel that can be posed open or closed, although it is not movable. There are two racks for shells for the cannons that install on the interior of the shell.

The last step installs the circular exterior tread that comes in four pieces. The pieces fit together nicely to create a seamless tread, although they don’t appear to touch the interior rollers. The tank also has two training wheels, one on each side presumably to keep the thing from falling over. The struts and wheels for the training wheels seem small & flimsy compared to the mass of the tank ball itself.

This was a fun and unusual vehicle to build. The fit of the parts was good, it has reasonable detail, and allows the addition of some interior plumbing and wiring detail. It’s obviously a whimsical idea with some practical drawbacks, but still was a fun build.

Thanks to MiniArt for producing this kit, and hopefully more, in the What If…? series.