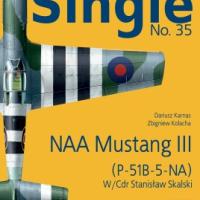 The MMP/Casemate Single series of publications has developed into a very useful tool for modelers to add authentic details to their models. The books usually take one type of aircraft, and in this case, one particular airplane, and provides extensive detail, including accurate view drawings in two scales, photos of the actual aircraft in service, copies of maintenance manual pages showing specific details of components, photos of details of surviving examples, and colorful four view general arrangement drawings.

In this case, the authors have selected an early production North American P-51B-5-NA, designated Mustang Mk. III by the British, which had been flown by a well known, in Poland at least, World War II Wing Commander of No. 133 Polish Fighter Wing, in England and France during 1944. Photos included in the book show his Mustang III with at least 21 kill markings near the cockpit, no small achievement during that part of the war. It is refreshing to see material published about leaders of foreign air forces flying American and British aircraft. There are a few photos of other Mustangs included, mainly to show the locations of various maintenance features that don’t always show up in file photos of aircraft.

The Singles series has come a long way since they first appeared, and they are a bargain for the price, especially if you are interested in that particular aircraft. Even if you are building different Mustangs, this book has value as a reference work, as it contains a wealth of useful information. The only thing I could add would be a set of decals in 1/72 and 1/48 scale to complement the text. Even so, it is a great little book. Don’t miss out on this one. Highly recommended.

Thanks to Bill O’Malley and Phil Peterson of IPMS, and Casemate publications for the review copy.