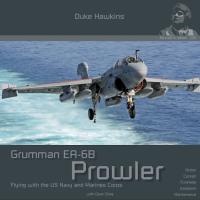 Duke Hawkins books from HMH Publications are a series of, currently, twenty-three different books on various aircraft. They feature superb photography and detail with hundreds of color photos on great semigloss heavy paper. This volume, number 21, covers the EA-6B Prowler in 140 pages and over 320 photos.

Rather than have a standard table of contents like many books, these dive right in and gives a brief introduction to the plane and its variants. Both Navy and Marine Corps versions are shown also. And then it dives right into the plane and its components. This starts with forward fuselage then fuselage then air intakes then more fuselage then wings, etc. working its way from the front to the back of the plane. Specifics such as the cockpit and landing gear get special attention during these parts. If you look at each section, for example the cockpit, which is always of interest to modelers, is done in 14 pages and broken down into front and back cockpits. There are a total of 32 beautifully taken photographs from all angles showing all the detail needed both in the cockpit and aft. The seats are also pictured in multiple angles. All of this is accompanied with very good commentary that is precise but not too wordy. The pictures speak for themselves in most cases.

Once done from back to front, the next section covers maintaining the Prowler and there an pages of shots of parts of the plane open for maintenance. Another entire section is devoted to the engines and those are also shown both mounted inside the plane and outside for replacement. Defense systems such as chaff and flare dispensers are covered along with a section on ordnance which in the case of the Prowler is mostly jamming pods. It also shows the Prowler capable of AGM-88 HARM missiles. External fuel tanks are also covered in this section.

Lastly, there is a 38 photo section of the Prowler IN Action showing the plane in flight, landing and other action shots along with carrier shots on deployment.

This book is most highly recommended. It is lavishly illustrated with crisp, clear shots of the Prowler from back to front and more. For the super detailer, this is a must have!

My thanks to HMH Publications and Casemate Publishers for the opportunity to review this book.