QANTAS and the Empire Flying Boat 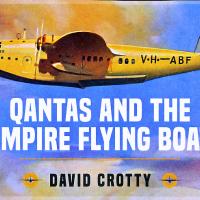 Between 1938 and 1948, QANTAS Short Empire flying boats navigated a dramatic and dangerous period for commercial aviation. They flew the Singapore to Sydney section of the pre-war Imperial Airways UK to Australia air route, introducing a new level of luxury travel to the route. However, the outbreak of war cut short this brief glamorous time and brought the boats increasingly onto the front line. Containing over 160 stunning illustrations, many previously unpublished, this book details the history of the Empire flying boats as they went from luxurious carriers to military service in roles that included the resupply and evacuation of Allied military forces.

QANTAS, short for the Queensland and Northern Territory Aerial Services, is never spelt with a ‘U’ and should always be capitalized when referring to its pre-war existence as a non-Government owned airline. This small book tells the story of a short but very important period in the history of this famous airline – the days of the luxurious and glamourous long-range commercial flying boat. With the introduction of the Shorts Empire flying boat in 1937, the dream of connecting England with Australia in comfort and with (relative) speed was now attainable, though setting up the services was not without a lot of difficulties, as author Crotty explains. Initially, the service was mainly intended as a means to enact the Empire Air Mail Scheme (EAMS), but the capacity and capabilities of the Shorts Empire, or C-Class, flying boat enabled both QANTAS and Imperial Airways to offer passenger service as well.

The coming of War shortly after scheduled flights began added more layers of difficulty to the service, and these grew exponentially once the Japanese entered the War. The author effectively tells the story of how these majestic boats were co-opted for war service - some more directly than others - both as patrol aircraft and transports and how effective they were in these roles.

The book is divided into three sections, outlining first the development and early service; then the wartime service and post-war demise; finally, each individual aircraft’s history is detailed in words and photos. Crotty writes well and concisely; the text is always an easy read.

This work is also lavishly illustrated with many fascinating period photos and documents, though the reproduction of some of these leaves something to be desired – a minor quibble in what is a very nice little work that could perhaps benefit from a larger format.

Nevertheless, I really like this book and can thoroughly recommend it to anyone interested in aviation history. Many thanks to Key Publishing for the review sample.