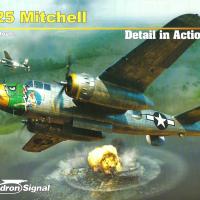 David Doyle’s latest book continues to expand Squadron Signal’s monograph series that initiated back in 1971. This is a completely updated and expanded edition over Squadron’s previous editions, including their 1978 edition, Aircraft In Action SS0034 by Ernest R. McDowell, Squadron’s 1997 Walk Around by Lou Drendel; and Squadron’s 2015 edition Aircraft in Action SS1221 by David Doyle. This 2022 release continues Squadron’s Detail in Action series that is intended to be a combination of the In Action and Walk Around series. All seven previous Detail In Action books were written by David Doyle (M50A1 Ontos; K5(E) Railgun; Ferdinand. Elefant; M3 Gun Motor Carriage; Gamma Goat; M19-M20 Tank Transporter; and F8F Bearcat).

Squadron / Squadron Signal is back in business again after bankruptcy in mid-2021 and are now based out of Ellijay, Georgia. Their web page was re-activated in January 2022 for plastic kits. Brandon Lowe re-acquired the publishing arm and they were able to publish their first new Squadron Signal book on May 11, 2022, with a new In Action book on the F/A-18 Hornet & Super Hornet by David Doyle. This was quickly followed by additional books by David Doyle, including: Squadron In Action F-14 Tomcat; F-111 Aardvark, and of course the subject of this review: B-25 Mitchell.

After many years of being published in enthusiast publications focused on military vehicle restorations, David Doyle ‘graduated’ to full-fledged books in 2003. His first book was a hefty 512-page history of US military vehicles. He has now had more than 100 books published in military vehicles, aviation, and naval topics. David and his wife Denise have amassed a collection of ten Vietnam era military vehicles that he still displays at shows. In June 2015, Doyle was honored with the Military Vehicle Preservation Association’s Bart Vanderveen Award, given in recognition of "...the individual who has contributed the most to the historic preservation of military vehicles worldwide." Be sure to check out David’s website at (David Doyle Books ) where you can see and buy at a discounted price all his books that are still available.

This book expands Squadron’s previous standard 60-page version format and it runs 136 pages packed with large, clear photographs. The front and rear covers feature gorgeous color illustrations by artist Piotr Forkasiewicz. The front cover depicts an Air Apache from the 398th Bombardment Squadron, 345th Bombardment Group. This North American B-25J, s/n 44-39577, was nicknamed “Lady Lil” and is shown conducting a naval strike on Japanese shipping in the Southwest Pacific. The rear cover portrays ten of Doolittle’s sixteen Doolittle Raiders skimming the Pacific Ocean on the way to their targets in Tokyo. I counted 370 well-captioned photographs; 228 in color and 142 in black and white. Ten color side profiles are also included along with a color illustration of the dorsal Bendix turret. There are ten black and white side profile drawings depicting the variants by Melinda Turnage and three black and white technical line drawings of the Bell Gun Mount Assembly, the waist gun layout, and the tail gunner controls for aiming.

The North American B-25 Mitchell’s first flight was achieved August 19, 1940. Named after the father of strategic bombing aircraft, Major General William “Billy” Mitchell, nearly 10,000 aircraft would be built during World War 2. The Mitchell would gain fame early on with the Doolittle Raid on Japan and would remain in service until 1979 (Indonesia).

David Doyle kicks off with the North American funded NA-40 prototype and the following NA-40B. The North American B-25 with its straight wings (the first 9 aircraft) followed by the gull wing variant that followed. Utilizing many clear, well captioned, photographs, many that have never been published before, David Doyle addresses each production variant in its own chapter from the B-25 through the B-25J that includes a page or two addressing the major changes. Detail on the B-25B turrets is displayed on Page 17, notably three of the black and white photographs showing the retractable ventral gun turret. Many of the color photographs are of currently flying North American Mitchells. Page 55 provides a nice rear quarter view of Yankee Warrior, a B-25D-35-NC. She is currently based at the Yankee Air Museum in Ypsilanti, Michigan. The B-25D was close to identical as the B-25C Mitchell with the primary difference that the B-25C was built in Inglewood, California, and the B-25D was built in Kansas City, Missouri.

Details of the B-25H cockpit and dorsal Bendix gun turret are shown on Page 68. Notably is the change in the cockpit to accommodate the 75mm cannon and the elimination of the co-pilot. Center of Gravity issues forced the dorsal turret to be moved from the rear to just behind the cockpit. Period color photographs of the B-25J Mitchell are displayed on Page 104. Notable on the B-25J “Blonde Betty” are the blast suppressors on the chin pack guns which can easily be compared to the standard chin pack 50s on “Ringer Squadron” in the lower right corner. Variations of the B-25J dorsal turret are shown at the top of Page 124. The bottom of the page shows off a color side profile of B-25J-11-NA, “Grand Slam” that flew with the 500th Bomb Squadron of the 345th Bomb Group. The Table of Contents is as follows:

This is a gorgeous soft-bound book and is well worth the money. David Doyle provides lots of clear photographs with detailed captions. Whether you are building any of the standard scale model kits (or even the box scale kits), I would consider this volume essential as an aide to your build. There are also no shortage of decals, photo-etch, and resin bits to detail your kit, especially in 1/72 and 1/48 scale. If anything, with the easier availability of 3-D printing, there will be even more details / conversions available. If you own any of the previous releases in the Detail in Action series, you know what you are getting. If this is your initial entry into this series, you will be quite pleased.

My thanks to David Doyle at (David Doyle Books) and IPMS/USA for the chance to review this great book.