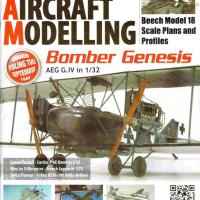 Scale Aircraft Modelling's September 2015 issue comes packed with great build articles of some unique planes as well as continuing its fine history and modelling articles with everything from new kits, scratchbuilds and older kits.

Revell of Germany’s 1/144 Airbus A330-330 gets built two ways- one in Delta Airline markings and a shot of the same plane in Thai Airways markings. While released almost a decade ago, the kit still produces beautiful looking airliners.

Tony O’Toole’s article on the Short Sterling A Mk. IV and its participation in Operation Market Garden offer a review of a historic plane and one of its efforts. The article is both well written and extremely well illustrated.

The largest and most lavish article in this issue is Dave Hooper’s build of Wingnut Wings 1/32 AEG G.IV (Early). The article is very well illustrated covering the building of this very large WWI bomber. Details show construction of the excellent interior and all the struts, rigging and work required to get the kit finished. The beauty shots of the completed kit are fantastic.

Peter Doyle builds HobbyBoss 1/72 Jaguar A in French markings. He includes great photos of his corrections for the wing pylons and a few other omissions but these aren’t noticeable on his finished kit.