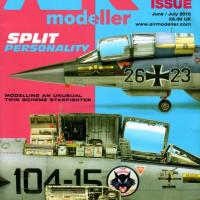 Air Modeller magazine was new to me when I volunteered for the review. I was very impressed. This is a 64 page high quality, modeling magazine without any advertising. The magazine seems to cater to the detail conscious modeler. This issue includes five detailed build articles:

The magazine also contains an article on new releases, as well as an article showing photos from recent model shows.

The photos on the cover show the detail that is being built into the Starfighter. Along with illustrating how to add super detail to the Starfighter, the article includes lots of tips that can be used with any build. My problem was that they didn’t mention what kit was used or the scale although they did mention that an Eduard cockpit set was used. The model being built is based on a Starfighter in the Madrid Air Museum, which is painted half in Spanish markings and half in German markings. Two pages of photos of the actual airplane are included. The article will be concluded in the next issue.

The Handley Page Halifax article covers the conversion of a 1/48 scale kit, apparently the Fonderie Miniatures kit, into the turret nose B.Mk II version. It involves a new nose that apparently was covered in part one. Features of the model include detailed turrets; a detailed engine, and open, detailed, bomb bays.

The Boomerang build is based on the Special Hobby, 1/48 scale kit. The article covers the basic build and detailing of the kit. The kit required lots of skill to complete and the builder covers this well. The article is organized into specific, illustrated steps – see sample page.

The Spitfire article covers the build of the Tamiya 1/32 Spitfire Mk. IX. Again, all of the major steps of construction are shown and of course, detailing is added along the way. The author does a good job of mentioning what products and techniques are used during the build.

The Curtiss H-75 A3 article covers the build of the 1/48 scale Hobby Craft kit. The model was built to represent the aircraft of Sergeant Marcel Milan of the Free French AF. As with the other articles, this build added incredible details and corrections to the kit. Accessories from Eduard, Quickboost, Squadron and Unicast were used along with lots of very detailed scratch building, re-scribing, re-shaping and adding of rivet detail. All in all, a great museum quality model build.

I was impressed with the magazine. As I stated, it is a glossy modelling reference rather then simply a magazine. It shows how to produce great quality models and along the way provides many how-to tips and techniques. While checking out the Air Modeller web site, I noticed that the modeler could not only purchase back issues, but also purchase and download pdf files of individual articles. That means that for £1.00 I could download part one of the Handley Page Halifax article. This is a very useful feature. This magazine is recommended as a good modeling reference.

The magazine can be obtained directly from the publisher. Individual issues as well as subscriptions can be purchased. They accept Visa and MasterCard. The bi-monthly magazine is also distributed in the US by Kalmbach and is available at LHSs and bookstores.

Thanks to AFV Modeler Ltd. for providing the sample and to IPMS/USA for letting me have this review.