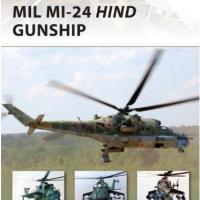 Osprey’s newest edition to their popular New Vanguard Series is an overview of the Mil Mi-24 gunship, popularly known by its NATO code name, Hind. Using the now-standard format for the New Vanguard series, the author explores the Hind’s development, its various variants, and a short combat history not only in the ex-Soviet Union and Russia, but the other countries who field this gunship.

The Hind was different tfrom the gunships developed by the United States – they were assault helicopters that served as a flying infantry fighting vehicle. They could carry eight armed men as well as ATGMs and rockets. After a head-to-head competition between the Mil and Kamov design bureaus, Mil was selected to develop what would become the Hind. The Hind A became operational in 1972 and was quickly followed by the Hind B which introduced the distinctive chin turret. When the Hind D went into service the design matured, moving the pilot and weapon system operator from side-by-side to the distinctive stepped, tandem cockpits. The P model replaced the chin turret with two powerful 30 mm cannons. The D and P models are still in service. While much space is devoted to the nuts and bolts of the Hind, little space is devoted to doctrine. Given the limitations of space, this is understandable, but it would have made the narrative more comprehensive if greater coverage was devoted to its use.

The book devotes six pages discussing upgrades to the Hind, but interestingly these are upgrades done by foreign governments as well as Russia. The last part of the book is devoted to the Hind in action. The author has a nice summary of action seen by Hinds not only in Russian service, but with Ethiopia, Iraq, Vietnam, and the former Soviet republics, though these are again summaries. Readers who went more detailed accounts on Afghanistan are going to have to look elsewhere, the coverage is very brief. Modelers should find the illustrations helpful. The book is full of color photographs from Western and Russian sources and for modelers, there are also a series of profiles as well. For anyone who wants an introduction to this weapons system, this addition to the New Vanguard series should serve you well. Modelers will certainly appreciate the color photographs of interior and exterior features.

My thanks to Osprey Publishing and IPMS/USA for providing this issue for review.