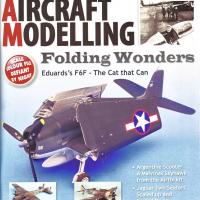 The new format continues to change to even more history interspersed with the modeling. The banner at the top of the cover even states "The Best for Modelling and Reference". The blue gray background are even more prevalent including the cover. The old structure and build types are gone and this concentrates more on feature articles.

The first feature article by Andy McCabe and is a test shot build of the new Revell 1/32 FW190 F-8. The finished engine OOB is awesome and detail overall is superb. The engine access panels even open to display the kits engine and all for a very reasonable price.

Richard Bolingbroke goes full bore with a two kits builds of Eduard 1/48 Hellcat series with a F6F-3 and an F6F-5. To top it off, he summarizes the wing fold kits that have been produced and uses the Wolfpack set on both to do the kits "at ease".

Part 3 of the UN Observation Post build by Derek Griffiths focuses of the setting itself with construction of the buildings, the base itself. He also shows construction of pots, pear plants and all the little things that make this diorama awesome.

Tony O'Toole builds Fly Models 1/72 Armstrong Whitworth Whitely Mk V. This is a limited run kit with resin detail parts and nicely done. The build of this kit shows how far along these smaller manufacturers have come. The panel lines are excellent and the finished build looks fantastic.

The Aircraft in Profile article by Richard Mason details Sukhoi's Su-9 and Su-11. Drawings and color profiles are provided. There is also an excellent section of pictures. This is followed by a look at Trumpeters new kit by Paul Cotcher and his upcoming replacement parts from Red Star Scale Models. There is also a article by Bruce Leyland-Jones reviewing Amodels 1/72 offerings.

The second Aircraft in Profile Part 2 is the Boulton Paul Defiant in night fighter markings by Paul Lucas. There are two excellent pages of color profiles with color call outs and marking options.

In addition, there are numerous notes, new kit announcements and other modeling related items. There is great detail on Airfix's announcement of their 1/24th scale Typhoon. As always, SAM is highly recommended for its content and excellent reference information.

Thanks to Scale Aircraft Modelling and IPMS/USA for the opportunity to review the May issue.