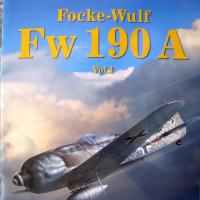 The Focke Wulf FW-190 was produced in very large numbers during World War II, and was used by Luftwaffe and other German allies until the end of the war. Since the aircraft probably exhibited a wider variety of camouflage schemes and markings than any other World War II fighter, it has become a favorite of modelers throughout the world, and over 100 kits have been produced of this aircraft in 1/72 scale alone, not to mention 1/48/ 1/32, and 1/144 scales. This issue only covers the FW-190A-2 through FW-190A-9, and does not include any of the prototypes or the FW-190D-9 or TA-152 series.

This publication presents outstanding color drawings of 20 FW-190 fighters in 1/32 scale, providing side views, top views, and views of the wing undersides. There is also a page devoted to the tail band markings of JG 1, JG 2, JG 3, JG 4, JG 5, JG 6, JG 11, JG 26, JG 54, JG 300 (2 markings), and JG-301. Drawings provide upper and lower surface colors, national markings, and squadron and identification markings. There is no text as such, only information identifying the aircraft, unit, pilot, and time when the plane was operational.

The small decal sheet measuring 3 ½” x 5 1/8” provides national insignia markings only for four models, two in 1/72 scale and two in 1/48 scale. There are no maintenance markings or squadron markings provided. The swastika tail markings are presented in two pieces for political correctness, although the color drawings show them in proper form. The decals, in keeping with previous Kagero products I have used, appear to be excellent, and probably can be used without the trimming required on many kit decals these days.

This publication is part of a series coming from Kagero providing information and materials for the modeler, with the Camouflage and Decal series available for the Bf-109 and various Japanese fighters, and series entitled “Kit Build” on Corsairs and some modern jet fighters. These appear to be devoted to one particular kit of the particular aircraft, although the book does not provide any more information than that.

This publication, and the decals, would be extremely useful to any modeler wanting to build an accurate FW-190 scale model in any of the above mentioned scales. Highly recommended.

Thanks to Casemate Publishing, and Kagero Publications for the review copy.