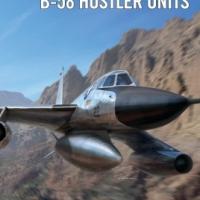 Hearty thanks to Osprey for sending IPMS USA one more of their first-class reference books to review, and thanks to John and Phil for the opportunity for me to do something different in reviewing... READ ON!

I have been asked on numerous occasions about what I like to read. I am so busy building and painting and doing “the day job” that I find it hard to define. I like modeling trade magazines for learning what is the new “Shiny thing” that has come along, and also little frammazamits coming available to budget for. I also read of the world we live in (THE EPOCH TIMES comes to mind) or a foot-thick manual on how to save a marriage (yep, me too).

In this case, however, I found Osprey’s publication #130 on “B-52 Hustler Units” by Peter E Davies to be particularly engrossing. This paperback, 96-page book is a concise review item, packed with information and well-written, easy to absorb data. Beginning with pre-development and competing potential airframes, along with excellent unseen-by-me clear and concise photographs of the competitors; these, as well as many development and concept maturation details of the B-58, (and moving on to operational use including “end of life cycle” disposal), filled many a void in my knowledge base.

The first thing most people interested in the B-58 ask on receipt of a new book on this bird is whether the old tale of the “SAC Vietnam Camo” with gloss black undersurface actually existed is addressed.

Yes, it is addressed, and the answer is no, it has never been proven to have received this paint scheme. The purpose of AF Technical Order 1-1-4 is to provide basic guidance for painting USAF aircraft, and standardize the myriad individual painting specifications for the entire fleet. Notice most of the three-or four view drawings in this tech order are really just crayon scribbles and not extremely well done… It is NOT directive other than to provide the basic decision on which Federal standards will be applied as a minimum to aircraft, but in no singular case does it require individual units to go “over and above”. It is a minimum standard. The reality is the Southeast Asia paint diagram was provided IN CASE a formal directive to send the B-58 into theatre basing. The author rightly points out nobody has pictures or other proof, including those who were stationed or visited Little Rock, where some have claimed to have “heard from a club member who knew an uncle’s cousin’s brother who was in the Air Force at the time who saw it in a hangar”. (For proper effect, put your plastic fake nasty never-been-brushed or flossed blackened-root buck teeth over your real ones and use the backwoods sinister tabloid-educated, conspiracy-theory voice while stating this).

To date, nobody has produced any evidence… and although a MER looks cool loaded with Mk 84 slick bombs on “conceptual pylons” (there’s that word) in a contest with a Vietnam camo Hustler, there is also no evidence or test data for how that design was determined. Reynolds numbers, separation diagrams, pylon clearance directives, camera film of release and clearance, airflow and wind tunnel effect data appears nonexistent (that I can find on open source). My thoughts are “your model, have fun” applies… but don’t enter it in a contest with any historical contest except “concept”.

Enough of that… what is MORE important is Osprey follows their usual format in having great cover art, in this case another digital work with smudge tool used to effect movement, conveying a Hustler cooking along at the speed of heat in the Western United States, illustrated by Gareth Hector. The full-color profiles by illustrator Jim Laurier inside the remainder of the title cover myriad interesting B-58 schemes for the more interesting versions… after all, with a production run of just 116 aircraft, and with an operational life of just 10 years from 1960 before consignment to museums and the boneyard, the Hustler has only so many distinguishing operational paint schemes on the polished titanium and aluminum structure… and it was one of the few aircraft to maintain this bare metal scheme throughout its service life. By the way, the cover painting story is included and is VERY enlightening, setting the stage for the remainder of the anecdotes in the book. And it’s filled with them…

Operational information abounds to support the images; from testing difficulties with the ultra-small wheels and tires, (…ever see a long-legged cat on skates running from a dog? That’s what those tires must have looked like while doing their job…) …to the speed record runs, a concise history is provided. I was unaware of the actual mission of the aircraft other than “high-altitude nuclear bomber”, and was surprised by the low-level delivery operations evaluated. I always envisioned this as a high-altitude bird, but no, it’s more of High-low ingress, with a pop up delivery and full speed exit to climb later after the attack as fuel conservation. The aircraft was Mach 2-plus scat-fast, and could go faster but structural damage from overheating limited such operations. Nothing says “bad day” like having your aircraft melt on you with subsequent disintegration. We call that “rapid in-flight disassembly” in the program office, also known as “exploded”.

Consider also the number of in-flight refueling events required for a single aircraft on a penetration mission, which guaranteed a lot of attention from the target defensive systems. (“Comrade Colonel Ivanovich, what are all these dots converging on us from the northeast?”) The original J-79 engines sucked and burned even more dissolved dinosaur and vegetation at full power than newer models, but not by much.

The 1960’s were a time of discovery and operational change, and the Hustler was unfortunately not an operationally viable mission system in the scheme of things. It was extremely expensive, both in maintenance and supply, was a small fleet, and economy of scale was not to be realized. Even General Lemay, the infamous leader of Strategic Air Command, was not impressed with and resisted utilizing the JP-4-guzzling Hustlers in operational mission suites from day one… and when he didn’t want to keep something, it usually went away… never mind the fact “the system” appeared to be stacked against the object of his attention as well.

Ostensibly a tough airplane to fly, (and accidents proved it), the attrition rate did not help things, and the Hustler now has six remaining airframes in various locations throughout the United States.

In the end, this is another really decent book, with status of all tail numbers, operational scenarios and commentary from Crew and others the focus of the stories; I highly recommend this book for subject and professional presentation. A worthy addition to the library, thanks again to Osprey for sending it for our IPMS/USA review, and John and Phil for magically making it appear in my mail.