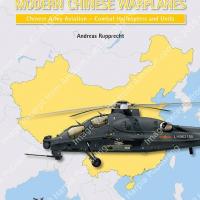 For enthusiasts of modern Chinese aviation, Andreas Rupprecht is the foremost Western expert on the subject. His work has been featured in various defense publications, and is quite well known in aviation enthusiast circles. Harpia has tapped his vast knowledge on the topic to produce a series of books on the topic. His fourth title, Modern Chinese Warplanes: Chinese Army Aviation – Combat Helicopters and Units, looks into a much overlooked and under-researched topic – aviation in the People’s Liberation Army Ground Forces, and is written with the high level of detail Ruppercht is known for. Incidentally, the book also details aircraft, UAVs, and even wing in ground effect aircraft despite the title.

The book is organized into seven chapters:

A very fun piece of trivia is the PLAGF’s naming convention for their recent helicopters. While American helicopters up until recently have been named after Native American tribes (except for the AH-1), Chinese helicopters use the flamboyant nicknames of the 109 bandits from the Chinese 14th century novels The Water Margins and Outlaws of the Marsh. Hence, the Z-10 is called the Fierce Thunderbolt and the Z-19 is called the Black Whirlwind.

Note that page 56 is deliberately left blank – the book is laid out so that the chapters always begin on odd page numbers while is makes it easy to locate chapters by thumbing through the pages quickly, it is a bit of an anomaly in an otherwise well laid-out book.

All photographs are clear and in color in beautiful heavy weight glossy paper, as is the usual standard from Harpia. Although the book is in English, there is the occasional grammatical error and can a bit jarring. This is likely due to a title published in English from a non-English publisher. Despite these occasional hiccups, I still enjoyed the book thoroughly. The information from this book comes from the author’s own research, corroborated with his extensive network of fellow aviation enthusiast sources, many of whom unfortunately choose to remain anonymous. However, the information itself is very accurate and substantiates a lot of my own research and sources.

While there is very little in the way of published information regarding China’s military assets, we are fortunate that there are writers such as Ruppercht, who have taken the time to write such a detailed manuscript. For aviation enthusiasts, this book provides a fantastic insight into one of the world’s fastest growing and modernizing militaries, and is a must-by for anyone looking for a serious and unbiased view of this rising power. For modelers, it does not provide as many reference photos for say, a Jake Melampy book, as this book is more of a survey of the PLAGF, but it does have quite a number of clear images showing the aircraft in action, and would definitely inspire the next build in the queue. It’s unfortunate that detailed photos and data on specific aircraft are hard to come by, because I feel that Harpia could easily publish a very profitable and popular line of profile books on Chinese military aircraft the likes of that which avgeeks take for granted in the West. I highly recommend this book for both of these audiences.

I would like to thank Casemate Publishing for the opportunity to review this excellent book.

If you have a keen interest in modeling aircraft of the PLAGF, there are some decent choices on the market. The kits listed below are the aircraft that can be built into an accurate representation without any conversion. They are only available in 1/72:

Harbin Aircraft Industrial Group (HAIG) Z-9WA (Dream Model 720002) – a license-built Aerospatiale SA365 Dauphin 2, the Z-9WA was a stopgap measure for an attack helicopter until the Z-10 went into production.

Changhe Aircraft Industrial Corporation (CHAIC) Z-10 Thunderbolt (Hobbyboss 87253) – the PLAGF’s primary attack helicopter replacing the Z-9. This kit models the prototype with the Pratt & Whitney PT6C-76C powerplant. Incidentally, the prototype isn’t painted black, but a very dark blue. It’s interesting to note that the Z-10 prototype had upturned engine exhausts, as the production variants have the conventional side-facing exhausts. The upcoming Z-10ME sports upturned exhausts, and upturned exhausts have been turning up on refitted airframes lately as well since February of 2020.

CHAIC WZ-10 Thunderbolt (Hobbyboss 87260) – Also known as the Z-10K, this is the PLAGF’s current variant in service as of 2015 sporting the WZ-9 powerplant designed by the 602 Research Institute. The fuselage and clear sprues have been completely retooled, but retain the same weapons and rotor tools as the predecessor kit. This isn’t black either, but a dark green (or black with a greenish tint).

HAIG Z-19 Black Whirlwind (Dream Model 720011) – the new armed reconnaissance helicopter. This kit was released late 2019 and has the optional MMW radar mast that’s been spotted on the machines since 2016. Like the Z-10K kit, this has the very dark green/almost black paint scheme.

You can also build a PLAGF Sikorsky S-70 by painting any S-70A kit olive drab and applying the appropriate markings on it. The Z-20 is not a Black Hawk, though, and is a completely different airframe despite the similarities.