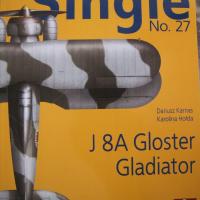 The Gloster Gladiator was the last biplane fighter to be used in large numbers by the Royal Air Force before the arrival of monoplane fighters, such as the Hurricane and Spitfire. In addition, Gladiators served the Royal Navy as the Sea Gladiator, and were exported to other countries, including Latvia, Lithuania, China, Sweden, Belgium, Finland, Norway, Iraq, Erie, Portugal, Egypt, and Greece. The British examples were withdrawn from first line service by 1941, although they soldiered on in other countries well after that.

The Swedish government ordered fifty five, but sent thirty to Finland to help that country defend itself against the Russian invasion. Many of these, actually Sea Gladiators, were flown by Swedish volunteers. Twenty five were operated by the Swedish Flygyapnet, and a few survivors were returned to Sweden after the war, one of which survives in the Swedish Air Museum, on skis, in Finnish markings. Good detail photos of this aircraft, and color drawings, are presented in this book.

This book, in keeping with MMP practice, covers one airplane in extensive detail, although there are photos of several other Swedish and Finnish Gladiators included in the book. This is not a book devoted to the history of the Gladiator. There are many other sources for that information, including Profiles and the books by Alex Crawford, another writer for MMP Books. It is, however, a very detailed study of the Swedish Gladiator, including the ski equipped versions operated in Finland. So if you intend to build a model of one of the Finnish Gladiators, FV278, which is preserved in the Swedish Air Force Museum in Linkoping, Sweden, this is the book to have. The book shows the aircraft in Finnish markings and in the markings it carried after its return to Sweden after the war.

This book will be extremely useful to serious modelers who are interested in building accurate models of this aircraft. Since there are good kits of the Gladiator in nearly all scales, and drawings are provided in 1/72, 1/48, and 1/32 (in color) scales, it is to be highly recommended for modelers who are interested in this aircraft. Don’t miss out on this one. The price is right. Go for it.

Thanks to Bill O’Malley, Phil Peterson, and MMP Books for the review copy.