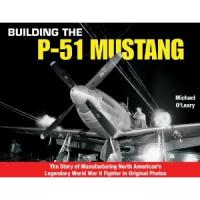 Modestly speaking, I thought I knew a lot about the P-51 until I read this book. It has many great photos of them being built in the factory, showing all the internal structure and components, making the book an excellent reference source for modelers. There are also many pictures of the early variants (my favorite versions) that I hadn’t seen before. Photos of the Allison and the Merlin engines are plentiful, and should satisfy any detail-oriented modeler. My only objection to the book was that it never explained the reasoning behind the change in the wing root leading edge between the P-51B/Cs and Ds. Every P-51 modeler would be delighted with this book, if only for the pictures, but it’s a good read as well.

Thank you to Specialty Press for the opportunity to review this book.