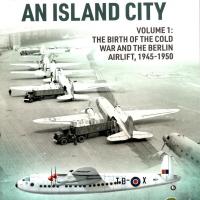 Andrew Long, from Great Britain, is a military history researcher and author. His fascination with the Cold War began with a trip to West Berlin in 1986, travelling through Checkpoint Charlie to visit the East. Andrew’s writing comes from a desire to make sense of an extremely complex period in modern history, weaving together inter-relating stories involving politics, ideologies, personalities, technological advances, and geography. There is still much to be told on this fascinating subject. After a successful career in marketing, Andrew relocated to Cornwall and took up writing full time. He is also the author of Cold War Berlin: An Island City Volume 2 1950 – 1961.

At the end of the Second World War, the city of Berlin was located 100 miles (160 km) inside the Soviet Occupation Zone of Germany. The Western Allies insisted on keeping part of the city for themselves, and so it was divided into four sectors, mimicking the rest of Germany. Stalin needed to persuade the British, French and Americans to leave so that there would be nothing in the way of him completing the strategic buffer of territory reaching from the Baltic Sea to the Adriatic, which Churchill would later christen the ‘Iron Curtain’. Cold War Berlin, an Island City is the story of how Stalin imposed his iron will over eastern Germany, and how he tried to squeeze his former allies out by cutting off their lines of supply and blockading the city. It examines the logistical miracle of the Berlin Airlift, which fed and heated a city of over two million people for almost eleven months. It is a story of alliances forged in the uncertainty of conflict, based on common interests and pragmatic convenience, alliances that would shape the twentieth century but would be betrayed for strategic or political reasons. It is also the tale of how competing ideologies came face to face in the city of Berlin and the new “Cold War” that would come to dominate the second half of the 20th century was created out of the embers of the Second World War.  – Casemate

I had the opportunity to live in northern Germany during the early to late-1980s and visited Berlin & East Berlin multiple times.  Although my residency there was not at the beginning or at the height of the Cold War, its remnants were all still very palpable.

This book does an outstanding job laying out the background for the beginning of the Cold War and detailing the behind-the-scenes negations of how Berlin was carved up among the four major power, how and why police state was formed in East Germany, and how East Berlin was cut off from the West necessitating the Berlin Airlift. The author, Andrew Long, has skillfully narrated the story of oppression and state control, which I experienced a decade before the fall of the Berlin Wall. I would like to thank him for giving me a deeper appreciation for this city’s history.

For readers familiar with this period, you will be enriched and will undoubtedly gain a deeper understanding of why and how the Berlin Airlift came about. If you are not very familiar with this era, I highly recommend this book.  It is an informative and lovely illustrated book, which guides you through this important moment in history.

As a model builder, I found the beautiful and highly-detailed color illustrations of Airlift planes to be invaluable. I had never seen color plates like these. Abundant high-quality black and white photographs depict Cold War-era vehicles, city scenes and support aircraft—all of which are excellent recourses for diorama builders and for models.

Overall, this is an excellent book, which contains a cornucopia of knowledge about the Berlin Airlift, and for model builders it is a worthy resource to aid in the accurate depiction of Cold War-era dioramas and models. I recommend you should also have Volume 2 to complete your resource archive!

Thank you to Casemate for providing a copy of this fine book for review, and thank you to IPMS for the opportunity.