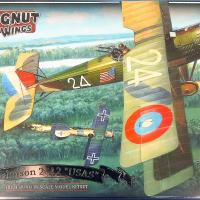 First entering service in October of 1917 with French forces, the Salmson 2-A2 was enthusiastically received by its crews as a rugged and dependable improvement over earlier designs. It soon entered service with the United States Air Service in June of 1918. In its brief service with the American Expeditionary Force (AEF), a reported 705 examples of the 2-A2 were delivered, although they saw limited combat duties, and went on to serve with the occupational forces in Germany following World War I. The 2-A2 continued to serve with French forces until 1921, and saw further limited service with Russian, Czechoslovakian, Belgian, and Japanese forces. The Japanese version was built under license as the Japanese Type Otsu 1 Reconnaissance Aircraft through 1933.

Once again, Wingnut Wings delivers one of the best values for the modeling dollar with its recent release of the Salmson 2-A2 variants. How much can a model company cram into a box with a $99 price tag? Simply put, a lot!

The Salmson 2-A2 ‘USAS’ kit features:

Holy cow… what a build! The build sequence is traditional in the aircraft sense–cockpit and fuselage, engine, wings, undercarriage, empennage, and armament–with the addition of exterior fiddly bits along the way. The overall detail, engineering, and fit is phenomenal, although there are a couple of minor things to account for during the build.

The cockpit is remarkable. A fully detailed structure, floor, seats, instrument panel, wireless gear, camera, fuel tanks, and the like absolutely pack this fuselage. Any modeler wanting to show off their handiwork in the “office” will need to snap a few pictures before buttoning up the fuselage since 85% of the detail will be hidden from view. Cross-referencing photos, CAD drawings, and descriptions, in multiple steps over multiple pages of the fantastic instruction manual provide a thorough accounting of colors and fit of all parts. Diagrams of the internal rigging are also provided, as are pre-drilled holes in the internal structure.

Moving on to the powerplant, consistently thorough and fine detail is the order. Cylinders, pushrods, intake pipes, mounting plate, magnetos, and radiator shutters are exquisitely molded and engineered to render a convincing replica of the 260hp Salmson 9z. Engineering tolerances of fit of the engine and cowling flaps are extremely tight, and require some attention from the modeler to ensure all prior assemblies are well-seated and aligned to assure proper fit of the final assembly.

The lower wing sections fit snugly into the fuselage sockets, ensuring proper alignment and dihedral. At this point, the aircraft was masked, painted, and decaled prior to assembly of the top wing and other features to the airframe. The struts press-fit into the lower wings with absolutely no slop whatsoever. The cabane struts, integral to the cockpit and fuselage structure, serve as the anchor and alignment datum for the top wing assembly, which press-fit snugly onto all of the struts with perfect alignment.

Rigging of the wings and forward fuselage was carried out at this point. EZ Line, available through WNW, was used for all rigging. EZ Line is an excellent elastic thread designed for modelers to use as aircraft rigging, model railroad telephone wires, and other similar purposes. Instructions for its use and ordering are available on the WNW website. The pre-formed holes and EZ Line make rigging nearly fool-proof but still tedious. Landing gear and empennage were then added and rigged, with the addition of the prop and final fiddly bits rounding out the build.

Overall, the “buildability” was superb, although the empennage did not cleanly align in the horizontal when the lower braces are completely seated. Also, the undercarriage is a bit “springy” and deflects somewhat when bearing weight of the finished model; the same phenomena was observed on the WNW Fokker D. VII build a year prior. Perhaps future kits could include white metal undercarriage parts for added rigidity.

The Finish and Markings

An assortment of Tamiya acrylics, Testors Model Master Acyl, and Italeri acrylics, along with Floquil Old Silver and a handful of Alclad colors, were used for this project.

Wood grain was simulated with MM Acyl Wood as a base color, with the wood grain drawn on with an artist’s colored pencil (brown), and then over-coated with Tamiya Clear Orange. Floquil Old Silver replicated bare aluminum, while Alclad was used for guns (Gunmetal) and exhausts (Exhaust Manifold), and Testors square bottle Copper was used for the cylinders.

The paints for the standard French 5-color camouflage were assembled using the kit’s paint reference chart, supplemented by Paint4Models.com’s cross-reference chart. Tamiya acrylics and Testors MM Acryl colors were used, and then over-coated with an acrylic gloss to prep for decal application.

Kit decals, printed by Cartograf, are very well executed with sharp registration. They went down with little issue and responded well to the MicroScale decal setting system. Once fully cured, they were sealed with a satin acrylic finish comprised of a 50/50 mix of Future and Model Master Acryl Flat.

WOW! Wingnut Wings makes building a biplane very “doable” for modelers with some experience, but who may feel intimidated by all the alignment and rigging required when building such a subject. Although there is tons of stuff in the box, it all goes together so well and precisely. The engineering provisions made to accommodate the rigging, as well as the marketing of EZ Line through WNW, all but eliminate the modeler’s mental barriers to the rigging process.

I HIGHLY RECOMMEND this kit. It is a MUST HAVE for any modeler of large-scale WWI aircraft, especially those in service with the AEF. It’s also a great starting point for those intermediate and advanced modelers wanting to “take the plunge” into WWI and rigged subjects.

Many thanks to Wingnut Wings for the review sample, and to IPMS/USA for the chance to build and review a truly outstanding kit!