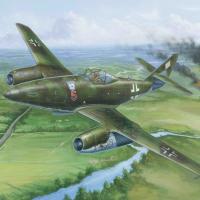 HobbyBoss has released a hypothetical production variant of the Me-262: the A-1/U1 version. Is this a Luft’ 46 model? Some might say yes, but the truth is that both the enhanced nose weaponry (MG 151 and Mk 103) and the X-4 missiles were all manufactured before the end of WWII. I would say this is a Luftwaffe ’45 “2nd-Half”.

The kit comes in 12 grey sprues, 2 clear sprues for the canopy and a metal nose wheel well to prevent having a ‘tail sitter’. The sprues are cleanly molded, free of flash and with well-defined recessed panel lines.

The model has a full interior consisting of a nose gun bay, fully detailed cockpit and main landing gear bay plus a nicely detailed back fuselage (with a radio set and a compass set). However the detail in the back fuselage is pretty much impossible to see once the model is finished. There is only one service panel and it is not large enough as to allow viewing of all that detail.

I’ve started construction with the cockpit tub and main landing gear well. Spend some time here doing careful painting and detailing and you will have a nice looking cockpit. The instrument panel and side panel comes as a decal, but the detail and side consoles have raised detail for dry brushing. I choose to use the IP decal –on top of the raised detail- and dry brush the side consoles.

The seat lacks of seatbelts and they are not provided as a decal either. I choose to add seatbelts from an Eduard “Luftwaffe Bomber” super fabric set I had at hand (Reviewed elsewhere in this website).

While dry-fitting the fuselage sides –and based on a previous HobbyBoss 262 I’ve built- I confirmed the tolerances are very tight. With a coat of paint, I actually had to sand back to the bare plastic in some area to recover the nice fit I had before. That is how tight the tolerances are and how good the fit of this kit is!

To close the nose you have to very carefully line up the nose panels in the down position. There are no locating pins for that so just take your time, use slow setting glue and line up all the 3 parts (port and starboard access panels and one center piece). I did add a thin piece of styrene sheet to re-inforce the join. Careful alignment work paid off in the form of no need for filling.

The wings presented no issues nor did the engines. I had to do some minor sanding of the engines-to-wing assemble to improve the fit. The tails surfaces were glued next and finally the rudder. After the joins were given 24 hrs. for the glue to set and cure I did some light sanding in the major seams and the model was ready for painting.

At this point I was thinking which color and camouflage to use. This model is a “1945 (2nd-Half)”. I imagine that by then the Luftwaffe would have been pushed even further on the defensive, with limited fuel the airplanes would be mainly on the ground and trying to get them to blend with the foliage. As such they should have been camouflaged on browns and greens, with a very low division line for the light blue undersides. With that in mind I went for a mix of RLM 83, Military Brown (I was out of RLM 81, such as the Luftwaffe might have been) and RLM 78 for the undersides. All painting was done with Model Master Enamels. After the painting was done a coat of Future was applied.

Like in other Hobby Boss releases I have built, the decals behaved quite well. They are thin and opaque, yet they can be handled a few times if needed, in order to position them. Note that the swastikas are provided as two half-markings that you have to compose together. You are provided with a full stencil set but I used only a handful of them as I thought that by then probably getting the airplanes to the dispersion fields was more important than getting all the service stencils on them.

At that point I’ve did an acrylic wash to bring up all the detail from the recessed panels, but I kept the weathering to the minimum. After all these airplanes were fairly new and most of them would have only flown one or two missions (Luft’ 45 “2nd Half”, remember?).

The landing gear went together easily, although mounting it was a bit of a challenge given the proximity of them to the engine nacelles. At the same time, the nose landing gear requires minor modification (shave off a side locating pin) to be installed after the model is assembled. You can still superglue it in place and it has a very positive fit.

Perhaps the only word of caution will be to consider adding a bit more of extra weight to the nose. The provided weight together with an extra lead sinker is enough to prevent having a tail sitter; however it is easy to tip it back on its tail.

Finally I had to do something about the MK 103 and MG 151. The parts provided in the kit are not bad, but they are not bored and look just like little “rods”. I used a Quickboost aftermarket detail set for the MK 103 and electric PCB connectors –with tiny little holes- for the MG 151.

In summary: the overall fit of the model is excellent. The surface detail is very good too. The decals behaved flawlessly. It is a great kit, with a price tag that provides great value for all the plastic and detail you get. Considering the number of parts (over 200) I would recommend this kit for any modeler, except a beginner.

I would like to thank MMD Squadron, Hobbyboss and IPMS/USA for the review sample.