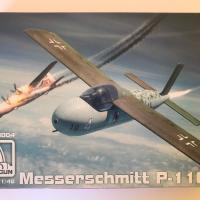 So the Messerschmitt Me P.1103 was designed in 1944as rocket-powered short-range interceptor. There were two variants proposed, the P-1103-I in which the pilot controlled the aircraft in a prone belly position, whereas the P-1103-II is where the pilot is in a seated position. The construction of the aircraft was kept simple due to the lack of available metals so it was constructed of wood.

The deployment of the simple interceptor was that it was to be towed to altitude by a Bf 109G or Me 262. When the desired altitude was achieved the aircraft would detach the tow cable in which it would then ignite a single liquid-fueled RI 202 rocket engine for a dash attack. It was armed with a single Mk108 30mm cannon which was located directly under the pilo’ts seat. After the attack was completed the aircraft would glide to a safe landing area in which it would land on a retractable ski, similar to a Me-163 would land. The aircraft would then be refueled and rearmed ready for the next sortie.

Unfortunately the P-1103 never went into production as it lost out to the Ba-349 ‘Natter’.

The kit by Brengun consists of 21 grey injected parts with the canopy being injected clear. The detail is recessed and is very crisp and subtle. The surface texture of the parts is slightly rough but a light sanding with a 3800 grit sanding pad resolves this minor issue. The instruction consists of 6 steps and it gives you the option of having the landing skid deployed or in the takeoff position with a detachable wheel trolley.

Construction begins with the cockpit, which for being a ‘disposable fighter’ is very basic: floor, seat, stick, gun, bulkhead, and instrument panel. It looked bare upon assembly so I added some Eduard fabric seatbelts to add some detail. Once that was completed the two fuselage halves are dry fitted together to check the fit of the cockpit. I needed to sand around the rear bulkhead and part of the cockpit floor sides so it would fit properly when the halves were finally glued together. The next steps were to attach the one piece wing and elevators to the fuselage. The fit was fairly good and required some very minor putty and sanding.

The only hang up was building the wheel trolley. The square bracket (part 20) has two notches for the axel (part 18) to go across the bottom of the trolley, however the molded part 20 has the notches on the top. If you assemble it the way the instructions show you will not be able to attach it to the aircraft properly. After thinking about it I had two options to fix this: notch out a small half-moon shape into the landing skid (part 5) or cut off and glue the ends of the square trolley bracket (part 20) and flip them so the axel is now on the bottom as it should be. I went for option two and glad I did.

The last steps were attaching the canopy and I then added a small plastic rod for where the Mk108 cannon barrel would stick out under the nose. At this stage I masked the canopy and then sprayed grey micro filler primer. The kit provides you with markings for 3 aircraft, 1 in a RLM 02 prototype, and then 2 camouflaged fictitious Luft ’46 squadrons. I liked the prototype version and utilized Model Master Enamel RLM02. The decals consisted of national markings and then individual aircraft numbers and squadron emblems. The decals were on register and adhered very will to the paint with no problems. The final step was sealing with a semi-gloss cote and attaching the trolley.

This was a nice little kit and could probably be completed in a day or two.

My hats off and thanks to Brengun for providing the kit for review as well as producing a fairly easy kit of an obscure aircraft, (bonus points for the injected canopy)