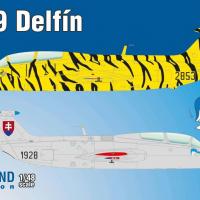 Eduard Models has repacked the very good AvantGarde AMK L-29 in 1/48 scale. Eduard provides a striking Tiger finish, with decals for each stripe. It also offers a photoetch fret and masks, but these add-ons are not part of the original Weekend box. They are items FE903 and EX596. I had the opportunity to review the extra items together with the Weekend box, so I went ahead and review them all together.

I really like that Eduard now is offering PE and Masks in the same month that they release a Weekend item. That truly allows the modeler to customize the level of detail he or she wants to use in finishing the model.

In the box you find 4 sprues (one clear) of the recently released 1/48 AMK L-29. You find what you can expect of a brand new mold: no flash, sharp panel lines, small sprue gates, firm but not brittle plastic.

As with most airplane models, the first order of business is the cockpit and by having the photoetch set FE903 you get the chance to have a nicely pre-printed instrument panels and seatbelts. If you choose to go the in-the-box route you are provided with very nice decals for the instrument panel, side consoles and seatbelts. The only thing you have to be aware of during assembly is that you need to remove some plastic rods from the ejection seat rails and that is very well indicated in the instructions and also easy to do. Snip them and use a file for cleaning and you’ll be just fine.

Remember, I chose to build this model using some extra detail parts (FE903) so what you see as the instrument panel and the seatbelts are not included in the box.

Before sandwiching the cockpit between the fuselage halves, you need to assemble the tail pipe and also the nose gear wheel bay. Given the design of this model it is a bit challenging to get nose weight in the nose gear bay. I ended up putting most of it under the cockpit, by means of folded lead foil. I also put some folded lead foil on top of the nose wheel bay and I might have got something out of alignment there as I needed to use some putty to blend things in.

Once the fuselage is closed, I used some clamps to keep everything in place while the glue set and I moved into the wings.

Assembling of the wings is very simple and straightforward. Just note that the fit of the air intakes (which is also part of main landing gear bay) is a bit tight. Light sanded took care of that. It is also handed, meaning that the left and right parts are not meant to be interchangeable. Once the wings are glued and set, presenting them and mounting them to the fuselage is another tight fit. This one is tight due to the tolerances. The curved air intakes almost will snap the wing into place. I think you can choose to mount the flaps in the lowered position, but instructions tell you not to do so. I decided to follow the instructions this time.

The tail assembly presents no issues. You will see it has a sound fit all around and it is virtually impossible to miss-align the parts there.

It was now time to lightly sand a few seams and prepare the model for painting. That is when disaster struck. The model went into a flat inverted spin from which it never recovered.

I masked the canopy using the EX596 set (not part of the regular boxing) and that was a breeze. I then started gluing the broken parts of the “divider frame” to the canopy and both canopies to the fuselage.

Painting of the model was accomplished by using Model Master enamels with my Badger 105. I did some pre-shading in black and then post-shading with a lightened version of the base color. A coat of Future prepared the model for decals.

Regarding decals: The model offers a fantastic “Tiger” scheme but honestly, I was a bit intimidated by the total number of decals as each stripe is a decal, and some stripes require more than a decal. A braver modeler than me would have a great time with them!

And I know it will be a great time because the decals I used (for the Slovakian airframe) behaved great. They were thin, with good color density, opaque and easy to move around for final placement. Honestly, the Eduard printed decals have nothing to envy to any aftermarket decal maker. They are as good as any of them.

While the decals were setting, I started working on the landing gear, landing gear covers and all the small parts. A great thing about this model is that it provides you with separate wheel hubs (easier painting time) and with a single tire piece (no seam to deal with!). I very much appreciate when manufactures take that route. I know it is not always possible (due to tire tread), but I really appreciate when they do it.

I was on the final stretch and adding the landing gear presented little issues. It was a bit tough getting all the parts in place given the relatively small size of the landing gear bays, but once in place, everything aligns perfectly.

An enamel wash was applied to panel lines and a flat coat sealed everything in place. For some reason I had a bit of orange peel on the flat coat in one of the wing panels (port wing, just outside of the national marking). After the coat was truly cured, I sanded it flat and I thought of painting that panel with a different shade of gray, like if that panel was a replacement from a different airframe. I’m still not quite sure if I like the way that came out.

In summary, the model itself is flawless and the Eduard decals (plus optional sets like the FE903 and EX596) make building this kit a joy. If I would have been braver -or had more time- I should have gone with the Tiger scheme. If I come across one of these kits on a sale, I’m pretty sure I would do the tiger scheme.

The only challenge is to find where to put all the required nose weight and make sure that won’t throw off the alignment of the model (which I think it did in mine).

A combined release of AMK and Eduard is a modeler’s dream. Don’t miss your chance and get this kit, plus some of the extra sets for it. You won’t regret it.

I would like to thank Eduard Models and IPMS/USA for the review sample.