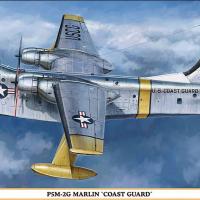 I am very appreciative of Hasegawa USA and Hobbico for provided a review example of a limited edition, reissued kit of one of the last flying boats used by the U. S. Navy and Coast Guard. I also wish to extend a very deep appreciation to the IPMS/USA Reviewer Corps for choosing me to review the P5M-2G variant of the Martin Marlin.

I recommend this kit for a collection of flying boat and amphibious aircraft. I completed an earlier version of this kit in 1985, and was surprised to see the very same instruction format as back then, with eight pages of black-and-white instructions, predominantly in Japanese. A short black-and-white instruction insert with new and replacement part descriptions, decal placement, and a painting color guide supplement these vintage instructions. A decal sheet allows one of two United States Coast Guard versions is included. Assembly was straight forward, with no major problems. The resulting model looks proper in comparison to photographs and references.

Initial Impression in the Box

The kit box arrived in a 19.5 x 10.75 x 2.4 inch box, featuring colorful artwork of one of the kit options. Poly bags enclosed the part sprues and the parts were not too tightly packed in the box. Five medium gray sprues and one clear sprue are included. No mold release traces were observed on any of the sprues. The plastic is shiny, and surface detail is both slightly raised or recessed. Decals and instructions were on the box bottom below the sprues.

Construction is straight forward, with traditional fuselage halves, and top-bottom wing and horizontal tail surfaces. Some flash is common. The fuselage halves were somewhat warped, but I was able to use the top hatch as a “key” to help aligns the parts. Very spartan flight deck detail is included and the flight crew are twins. Overall fit was a bit tricky, requiring a great deal of careful fitting and trimming. This particular challenge of this kit is the same today as it was in 1985 when I built the earlier version. Seams and attachment points responded well to liquid cements, such as Tamiya extra-thin and Tenax equivalents, and of course the cyanoacrylate family. The absence of cockpit detail is not a problem since it is not very visible through the canopy. Images of the USCG variants did not show ordnance racks, so I trimmed those off the wing bottoms.

I finished the kit in overall aluminum, with the intention of weathering the aircraft to show some saltwater exposure effect. The yellow decal markings are not close to the FS numbers specified on the paint callouts. I painted the yellow fuselage band, wingtips and black edges. The deicing boots were represented with black paper tape.

I used acrylic paints, and had many challenges with adhesion. The kit was washed prior to construction, as usual, the final assembly cleaned with Polly-S Plastic prep, and a light coat of primer applied before the aluminum top coat. I believe the very shiny plastic surfaces may have contributed to this problem. Enamels worked well in 1985, so I would advise experimenting with primer if you choose acrylics for a final finish. I did not add antennae or the noticeable exhaust staining patterns yet, pending better research images.

This kit is a reissue from vintage molds with different markings and provides some challenges to achieve a good result. Nonetheless, if you are a fan of USCG aviation, this is a kit for you!

Thank you Hasegawa and the IPMS Reviewer Corps! As always, it is an honor to be part of the team.

Finished with Saltwater In Mind
Previous Next

Thanks for doing this review.   I’m thinking about adding this kit to my collection of USCG subjects.  Are you aware of the USCG Aviation Association? Their website has 7 photos of the Marlin, including a great overhead shot of a plane on takeoff. You can see the engine exhaust stains clearly...

I’m wondering- which yellow did you end up using for the painted markings?