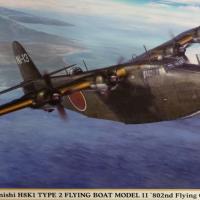 When I heard about a new Emily I was excited, as I had built the 1972 issue which had fit problems and a canopy that was too wide. I had sanded off most of the raised detail and scribed in new ones, but overall I remembered it as a tough build.

However, the price of 149.95 for Hasegawa’s new issue seemed steep, and as I had already built one Emily, thought I would pass on another. But! when I was availed of this review opportunity, I was all in to try another.

This one turned out to be an almost easy build. Molded in light gray plastic with a four-piece fuselage having a separate bow section, it all comes in a nice sturdy box with good instructions. The only exception was the many decks in the nose section which weren't depicted quite clearly. The kit also includes a complete set of crew figures with separate heads and arms; they’re well-done but I elected not to use them.

There are a lot of parts, but they fit wonderfully. Following the instructions, Hasegawa has the builder start with the wings, a departure from doing the cockpit first. I did deviate from the instructions if I thought it made sense, such as leaving the exhaust stacks off until after I painted the wings. You also must decide if you’re arming it with bombs or torpedoes, as you need to open up the appropriate holes from inside the lower wings before assembling the wing halves. I went for the torpedoes.

The engines are beautiful and fit was good. Two spars are built in, work very well, and the wings on my sample fit to the fuselage so well I just sealed the joint with clear glue. The interior features decks and bulkheads, tables and radios (and the crew figures if you are so inclined). I left out the figures but put in tape seat belts in the cockpit since I didn't think the viewer would be able to see much else.

Beaching gear is included, as is a separate vertical fin. There are extra parts not needed for this variant, so this second issue must not be the last. I used Testors Non-Buffing Aluminum Metalizer for the lower surfaces and Gunze Sangyo acrylic #H59 IJN Green for the upper surfaces since I still had plenty. Note, though, that it took about a bottle and a quarter to paint it.

There is a choice of two markings---both are green over aluminum. The wing walkway stripes have a huge amount of clear decal film in between them that I was concerned about. Sure enough, I ended up with some wrinkles in them and the yellow leading edge decals as well. I ended up slicing them and using more Solvaset to level them. I coated the entire airplane with Future and then flat coated it with dull coat. A set of masks is included which are nice and make masking much quicker. I elected to use clear glue for all the many small windows.

Overall, Hasegawa’s Emily builds quickly for an airplane of this size. I would like to thank Hasegawa and IPMS USA for the opportunity to review this kit.

Finished model of Emily
Previous Next