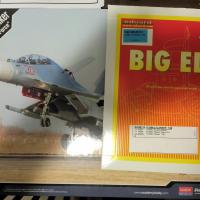 I won’t go into a long drawn out spill about the S-30M2 due to the fact that just about all of us know about the Su-27 Family of Soviet/Russian fighters or build one. So a brief history is as followed, the Su-30M2 is a long-range, high-endurance, heavy-class Air Dominance Fighter with multi mission capabilities. It is currently the most advanced version of Su-27 Flanker flying anywhere in the world. The Su-27, which was first produced in the Former Soviet Union starting 1982 is counted among the world's best fighter aircraft even without any upgrades; but some of the technology and capability that the Su-30MKI boasts has absolutely no parallels across the world's air forces. The Su-30M2 gives its operator a capability that will remain unmatched by all rivals for the foreseeable future. Eduard set consists of two previous photoetch sets and a mask. The photoetch sets deal with the interior and exterior plus the mask

Starting with the first photo etch set I commenced cutting the parts from the plastic kit and preparing them for modification. My first impressions, the Academy kit is the go to model kit for Russian/Soviet aircraft and Eduard really made this kit stand out further. Trucking on I added the self-adhesive photo etch placards and instrument panel into the cockpit assembly I then turned my attention to the ejection seat trimming off the old and adding the new watching a complete transformation take place before my eyes. The canopy deck also received the treatment and greatly improved the level of realism that I have personally experienced with a model.

Jumping out of the gate I first set about upgrading the gear bays and landing gear struts. All these pieces were easy to upgrade and turned out nicely though some cutting, sanding and some griping here and there was necessary. I then went on to the task of bending and gluing the brake lines and hydraulics which I almost thought was microscopic at times. The Missiles and the titanium gun shield were next. The AA-10 Alamos and the AA-11 Archers both received new locking slips that were more represented than the bulky protruding kit parts that I ground off. The Metal intake screens were a pleasure to work with despite their size and the constant bending, and twisting and more filing of the kit intake trunks to insure a nice tight fit. One part that was the static electricity absorbers on the wing tips, thank god for spare because I certainly lost a few.

These items look and work great. The masks are the usual pre-cut yellow tape. They worked like a charm and were easy to use.

Thanks to IPMS and Eduard. It was my pleasure. I recommend this set to anyone who has the 1/48 Academy S-30M2 and wants to breath some life into an already beautiful kit.