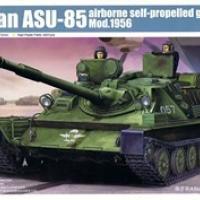 Soviet Airborne Forces used the ASU-85 in airborne operations during the Cold War Era. Its primary role was light infantry support or assault, with limited anti-tank capability. The ASU-85 replaced the open-topped ASU-57 in service. It weighs approximately 13,780kg or 13.78 tons and has a very low silhouette of just 2,1 meters. It is powered by one V-6 six-in-line water-cooled diesel engine with 240hp. It was designed on the PT-76 tank chassis, but lost its amphibious capabilities. Armament consists of an SD-44 85mm gun carrying 40 rounds (4 rounds per minute) and one 7.62mm PKT co-axial machinegun. Effective range is around 260km (162 miles), and armor protection is up to 40mm. The vehicle was NBC-sealed and equipped with IR-sights for night fighting.

The ASU-85 became possible with the introduction of the Mi-6 and Mi-10 helicopters and high-capacity multi-chute and retro-rocket systems for fixed wing-drops. It was first observed by NATO in 1962, and was widely used by Soviet and Polish airborne units.

The kit – What’s in the Box

Kit consists of over 420 parts on 19 spurs including hull, turret, brass wire, 198 individual track links and 36 photo-etched parts. The parts trees are perfect, no flash or pin marks. Each tree was individually packaged and the delicate parts had an extra wrap on them. You also get a full color painting and marking guide for 2 versions of the Tank.

Trumpeter has put together a very nice kit. The parts just fall into place. I don’t believe I used any putty or gap fillers on any of the seams. I only sprayed a light coat of Mr. Surfacer 1000 and then a light sanding across the seams.

Make sure to study the instructions first some of the parts go over the decals on the sides.

You start out by assembling the Sprocket, Road and Idler wheels, usual for a tank kit.

Next comes the lower hull assembly, the instructions tell you to mount the tools (some folks like to do this and paint them on the kit, but I prefer to paint each piece and add them later). The rear Hull Panel lines up perfectly to the hull. When you add the PE mud flaps there is a slight curve to the bend where it connects.

On one of the flood lights (D26) the instructions tell you to make a hole on top to mount the light, I found it was easier to cut the nubby part off the light mount bracket (B26) instead.

All the rest of the parts went on with no issues. Some of the smaller PE parts like the (PE-A12) tow cable mounts and (PE-A15) the small light protector cage. Also part PE-A9 on the main gun kinda kicked my butt for some reason, must have been too much coffee that night.

The tracks are really well formed and together nicely.

Painting was fast and simple; the kit is basically one color. I used Humbrol (226) Matt Green for the base color. Then I painted the oil drums with a thinned down wash of olive drab. Also the Main gun barrel was washed with khaki brown.

Once that all dried, a light cote of Future® was applied as a surface prep for the decals. Next the decals went on. Then any parts that needed to go over them were added to the hull, then a light cote of future to seal everything up.

The decals were thin and the printing was in register; they went on with no issues.

A light wash of lamp black artist oil was applied, then a light spray of dull clear cote to seal that layer. Next a light dusting of pastel weathering powders and some highlighting with a carbon pencil to add wear marks on the hull and hatches.

The kit was fun to build; the parts simply fall into place. It only took me about 20 hours of work to complete it. I would recommend this kit for medium to advanced builders only because of the small PE parts.

I would like to thank Stevens International and IPMS/USA for the opportunity to conduct this review.