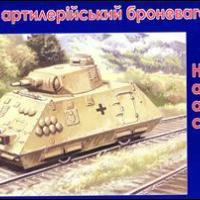 For the last several years, UM has produced a number of armored train components in 1/72 scale. It appears they are branching out and creating products of German armored train cars. The back of the box includes a short history of the vehicle, “Manufacturing of the heavy ‘S.Sp’ reconnaissance armored cars started in 1944. These cars were able to operate independently or as a train made up of similar cars. Several types of heavy armored cars existed. Artillery cars were armed with Pz. III (N) tank turret with short KwK L/24 75 mm gun. These cars had 20 mm of armor protection. Their weight (depending on armament) reached 18 tons. Maximum speed – 40 km/hr. Combat effectiveness of heavy armored car was almost equal to BP-42. ‘S.Sp’ participated in combat operations on Balkans from November 1944.”

The kit has five sprues of grey plastic packed loosely in a plastic bag. Two of the sprues are duplicates. A separate sprue includes the track and ties to display the completed kit. The quality of plastic and the level of detail is what you would expect of a kit of this scale. There was no appreciable flash on the pieces and the pour gates were dainty enough to avoid damaging the parts when they were removed from the sprue. Detail is on the soft side and the kit includes a small decal sheet of Balkenkreuzen.

Construction is straight forward. The undercarriage is cast as a signal piece and the wheels attach to brackets in the undercarriage. The fit was so tight I did not use the brackets (parts A8) to keep the wheels in place, just a dab of cement. Unfortunately, the carpet monster in my work space ate one of the wheels, so I substituted a simple circle cut from styrene card stock. The top portion of the vehicle comes in five separate pieces so great care must be taken to make sure that the completed piece is square. When B3 and 4 are removed from the sprue (the front and back of the car), the remains of the pour gates must be carefully removed to insure that there is a tight fit. While the fit of each piece was good, after the pieces had dried, I noticed that they were bowed and would not fit properly on the undercarriage. I have had poor luck with heat, so I measured and cut a piece of styrene tubing which solved the problem – the top mated with the carriage perfectly! One of the issues with Braille scale is that the small size of accoutrements that decorate the top of an armored vehicle. In the case of this kit, the hand tools are very fragile. Use care when removing them from the sprue. When I attempted to remove the shovel (B9) the shovel flew off the handle!

The turret comes in pieces and has to go together carefully to insure that it’s square. I lightly sanded the sides and tested until I was satisfied. Unfortunately, the rear halves of the turret, C9 and 10, had a substantial gap and need an application of putty. When assembled, the turret looks nice. It fits tightly in the turret ring, so don’t apply too much pressure when mating it with the body of the train car. I was debating whether or not to assemble the tracks but, since this is a rail car, it seemed appropriate. The instructions are rather vague in how the rail is positioned on the ties, so test it before you apply the glue. I am still not sure if I got it right, but the train seems to rest firmly on the railing.

The color call outs for the model are identified as Humbrol colors. As with most German vehicles after 1942, the overall color is Panzer Yellow. I use Tamiya paints exclusively, so Dark Yellow is the closest analog. I painted the tracks red brown and the rails metallic grey and dry brushed the tops with steel. I gave it a gloss coat of Future and put on the decals, a simple Balkenkreuz. I have seen better decals, but they are adequate. I did a wash of burnt umber and finished it off with a dull coat.

With the recent release by Trumpeter and Dragon of a host of German armored train cars in 1/35, it’s nice to UM is filling in the gap in Braille Scale. While some of the small parts may defeat those with beefy hands, the model was easy to build and went together very quickly. For those who are drawn to rail subjects, this kit is for you.

My thanks to Hobbyterra.com and UM Models for providing IPMS/USA this kit for review. For more information, please visit the Hobbyterra website for a complete catalog of their offerings.