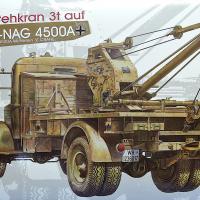 The Büssing-NAG 4.5 ton truck was manufactured for the Wehrmacht and Luftwaffe between 1942 & 1945. The truck was adapted for many uses including cargo, troop carrier, artillery prime mover, flak carriage, and even a version that could run on railroad tracks. This particular version of the Bussing Nag was fitted with a Bilstein 3 ton crane which could be used to lift engines and change tank gun barrels. After 1943, the Büssing-NAG with 3 ton Bilstein crane was designated Kfz. 100.

The Büssing-NAG was first issued by AFV Club in 2012 as a cargo truck, again in 2014 with new parts, and this version in 2015 with the Bilstein Crane.

The bulging 9-1/2 x 15 x 2-3/4 box is jam packed with dark yellow plastic sprues in individual bags by sprue type. Fifteen dark yellow plastic sprues are included, along with a bag of rubber tires, a bag containing the clear plastic parts, and a bag containing the photoetch fret, decals, and length of string. One of the sprues with large body parts was warped, but bending and gluing them in place helped straighten them out. The photoetch fret is brass and very thin. Inside one of the bags is a smaller Ziploc bag that includes four very tiny metal rods to be used as linchpins on the crane levers. The bottom of the box includes the images of other AFV kits. I counted approximately 715 parts including the photoetch.

Many of the plastic parts are very small and extremely delicate. The plastic has very good detail. There is some minor flash, and mold seams are prevalent on almost every part. Some of the parts have misaligned molds requiring extra effort to clean them up. The plastic is fairly soft, which helps reduce the brittleness of the long skinny parts making them easier to remove from the sprue. AFV molds many of the parts separately but they would be easier to install if molded together. An example are the two halves and center of the rear flywheel on the engine, parts E9, and E38. Parts D27 and D15 could also have been molded as one piece. Parts D17, D16 and D32 on the front of the engine would be a lot easier to install if they were one piece.

The parts have lots of pour plugs and sprue connections that will require careful cleanup, particularly the long, thin rods. The plastic is soft and flexible which helps with removal of the thin pieces from the sprue

Instructions come in a 28 page 8-1/4 x 11-5/8 inch stapled booklet with 53 assembly steps. The instructions include marking options for three vehicles, two in German gray from the Eastern front, and one in a green-brown, with olive green camouflage used in Tunisia. The instructions include some background information on the vehicle, and some sketches showing the crane in operation. Paint colors are called out in Gunze Sangyo, Humbrol, Revell, and Lifecolor. A parts list showing diagrams of the sprues and other kit contents is also included.

The assembly diagrams are exploded isometric type CAD views and appeared to be quite clear, although a few part locations are a little vague. Looking ahead to the next steps will help locate the parts. Detail paint instructions are called out within the assembly steps. A color poster of the box top art is included with the kit.

Steps 1 and 2 start assembly of the chassis. The cross members fit into recesses in the chassis side channels and square the chassis nicely. All the parts fit together extremely well and have nice detail. The small little exhaust pipe, AA58, has a hollowed-out end and very nice detail on the flange. Nice detail for so small a part.

Steps 3 and 4 add the front fenders, radiator, fuel tank, and other attachments to the chassis. Lots of small fiddly attachments here like the headlights, tail lights, etc. that hopefully withstand handling during assembly.

The front axle and differential are assembled in steps 5 and 6 with many small delicate pieces. Parts AA49 and AA54 actually assemble a working universal joint for the front wheel hubs. Be careful not to cut off the pins on parts AA54 when removing them from the sprue. The fit of the inner hub parts, AA22, to the axle is not very precise. These need to be plumb and square with each other so that the wheels will eventually align. The fit of parts AA36 & AA37 is not very precise either, and will need to be squared up so the wheels are parallel to each other. Several small photoetch parts, G4, are folded and attached to AA 36 & AA37. There are no fold lines to help with the folding which makes it difficult. These parts could just as well have been molded to the wheel hubs. After carefully trying to assemble the working universal joints, it does not seem they accomplish anything. Seems like the instructions should state to not glue the outer hubs and simplify the rest of the axle assembly. After all of this, installing the steering arms and linkage fixes the wheels so they can’t turn anyway.

Steps 11 through 15 assemble the engine into a nicely detailed subassembly. There are options to add further electrical and plumbing detail to the engine, however, it will be concealed under the hood unless the side cowls are left open.

The truck’s cab is assembled in steps 17 through 23. Most of the parts fit really well, and there are some small parts for the interior panels and levers which add some nice detail to the interior of the firewall. Parts C17 and C18 form the hole for the steering column. These two halves could be molded as one or even molded to the inside of the firewall. It's difficult to get to the halves together, and the correct alignment is unsure. Hopefully, this will align the steering column in the correct location. The dashboard is molded with raised detail for the gauges, which appear to be fairly accurate. No decals are provided for the gauges, however, and the instructions state to paint the gauges. It would have been much better to provide decals, or even photoetch pieces for the gauges. The windshield pieces fit the inside of the cab very tightly and required some scraping to get them in place. Both clear windshield pieces have some distortion in the plastic.

The truck’s hood is assembled and installed in step 24. The front grill and side cowls are wonderfully molded with openings in the louvers. Unfortunately, AFV puts the sprue connections at the joint between the hood and the side cowls making for a difficult cleanup. The hood, grille, and side cowls fit very nicely to the front of the truck.

Steps 25 through 28 assemble and install the wooden toolbox that goes behind the truck cab. The sprue for these parts was warped, and several of the parts were also warped. I bent some of them back into shape gluing them all together, which holds them in place fairly well.

The jerry can holder is assembled in step 27. Play close attention to where the notches are located on the frame so the holder assembles correctly. Five jerry cans are also built for the suspended rack.

The steel subframe for the rear wood platform is assembled in step 29. When the cross members, parts L8, are installed on the frame, do a test fit to make sure these fit with the parts K8 on the underside of the wood platform. The rotating base for the crane is assembled in step 31. Do not glue part I21 between parts I20 and I8 to allow the crane to rotate. Carefully glue part I7 to part I21 so the crane will rotate. There is a nice detail on the teeth for the rotating gears, but they will be totally hidden in the final assembly.

The rear wood platform is installed on the truck frame in step 34. Step 35 installs the cover on the toolbox, which can be posed open using brace H15. Steps 36 through 41 assemble and install the many pieces of towing and lifting equipment on the rear wood platform.

Steps 42 through 49 assemble the crane machinery and derrick. In step 42, part I6 does not have the projecting ears shown in the illustration. The internal mechanism of the crane is assembled in step 44. The mechanism is not designed to turn to reel in the cable, as part I12 is locked in by a semi-circle mounting pin, and reel parts I31 and I32 are only half the reel. The small retainers, parts 37, should have been molded on rather than separate pieces. AFV doesn't indicate that either of the levers L4 or the retainers L37 should not be glued, so they won't be rotating. In step 47, the delicate piece I34 was broken into several pieces during cleanup so I just omitted it. Step 47 also shows installation of the tiny metal linchpins. The levers don’t turn and are glued in place so the linchpins are not necessary

AFV provides a few decals for the vehicle, most of them going on the crane in step 45. The details are quite thin, tend to fold over on themselves, and the decal film is quite large around the image. The decals snuggle down nicely on surface details with the setting solution.

Rigging for the crane is installed in steps 48 and 49 using the thread installed in the crane housing earlier. The thread for the derrick support cable is just barely long enough if the derrick is in the extended position. The string is fuzzy, seems over-scaled, and requires additional weight to keep it straight.

There are three options for the outriggers in step 50: the outriggers straight down, angled outwards and stored on the underside of the truck. The outriggers are just barely long enough to angle out slightly. At this point, I installed the truck on a base to avoid further handling and breaking parts off the kit.

Steps 51 and 50 installs the wood covers for the toolbox and spare tire compartment. The last step, 53, installs an optional shroud over the base of the crane. I chose to leave it off to highlight the detail of the crate base.

This was a fun but challenging build with lots of part clean-up, so probably not for the less experienced builder. It took me over 60 hours to assemble and paint the kit, with more weathering yet to do. The fit of the parts varied from good to vague and required cleanup of every part. The detail is excellent and the finished kit looks fantastic. This is a unique vehicle and has many diorama possibilities with the different configurations of the truck.

Thanks to AFV for producing this excellent kit and providing review samples to IPMS.

Removing some small bits from the sprue

Mating the cab to the chassis

Truck body and bed on the frame

Body and bed of truck